I've never had my phone turn itself off with the warning message that it was not built to operate at such temperatures. This happened on Monday, when a heat-wave seared the greater Port Elizabeth area. Addo recorded 48 degrees; while our 'cool' fynbos site was 38. Its been a while since I've felt so uncomfortable, with a cold shower the only relief from the heat.

Jerry Mokgatla, Cape Sugarbird Masters student from Polokwane (up north), was happy that it was warmer. It also meant we caught no Cape Sugarbirds at his study site on Lady's Slipper, although we'd set the nets up relatively late, arriving on site at 7.30.

Ben Smit, Jerry's supervisor had joined us for the morning, and was also keen to help out with some Buttonquail surveys. There had been a fire in the area a few years earlier and the veld looked promising. However, our short mission did not result in any success, only the loss of copious amounts of sweat. Ben did find some chameleons to keep us entertained. 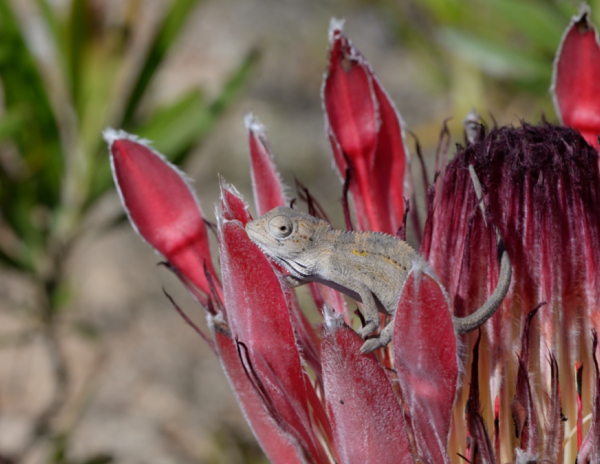 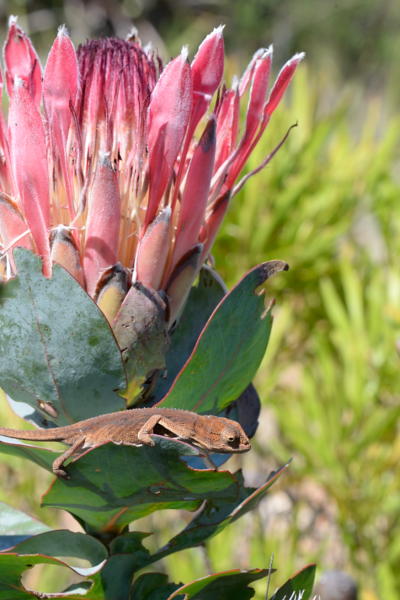 Tuesday morning Jerry and I were up on our way to Lady's Slipper at 4am, operating out of Van Staden's wildflower reserve. Weather was overcast, but by the time we got to our ringing site the wind was howling. Opening nets was out of the question. We sat in the car for 2 hours hoping for a break, but none was to be had. There was no sign of any sugarbirds either. We spent the rest of the morning scoping out the Longmore forest in the hope of finding more suitable buttonquail habitat, but without success. In the afternoon we conducted some behavioural observations on sugarbirds as part of Jerry's work to understand how Cape Sugarbird foraging is impacted by temperature. Protea mundii are just starting to put on a show at van Stadens and we had good views of the birds going about their busy social agendas.


Wednesday we finally managed to net some sugarbirds – all females and subadults. Ben had been worried about a sex bias towards males, but this session definitely evened out the ratios. However, the session would end early with the arrival of some persistent rain that lasted the rest of the day. A couple of Victorin's Warbler were the highlight of the morning: 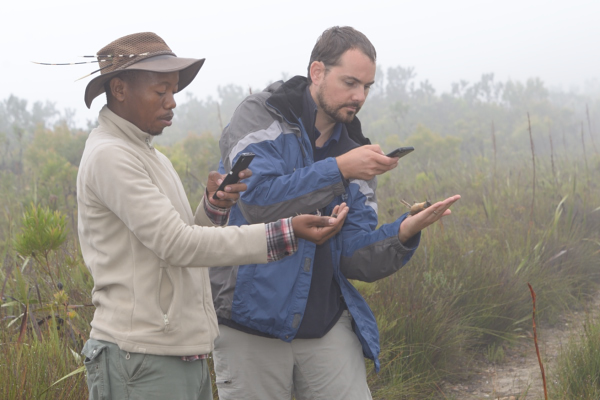 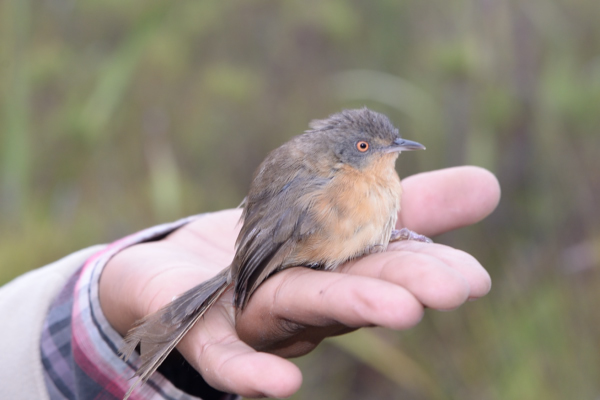 Luckily for me I would not have to spend any more nights in my tent as ECPTA and the wonderful management and staff at Groendal Nature Reserve had laid on the Rooikrantz self-catering cottage. This has to be by far and away the most luxurious accommodation I've stayed in as part of the buttonquail surveys.

On Thursday morning we had the crack team of rangers assembled (and Brian) to help with an ambitious survey of the upland plateaus that form the foothills of the Groot Winterhoek mountains in these parts. We were optimistic since the habitat is basically an extension of what we had been surveying in Baviaanskloof, where we had been very successful with finding Hottentot Buttonquails. After our ascent of 10 Stop Hill (which I was told 3 times in one day is called that for a reason) we reached the plateau with the first veils of rain, which would keep us company for the rest of our 7 km survey.

It was time to call in the expertise of resident expert ornithologist Ben Smit. Ben is familiar with Black-rumped from KZN, but has yet to officially tick off a Hottentot Buttonquail.

Friday morning finally dawned with balmy weather: temperatures in the 20s and sunny. Ben together with two of his students Nick and Anthony joined us with the rangers (and Brian). Expectations were high as we were basically surveying the adjacent plateau to the one from the previous day. However, 4.5km later and all we'd registered was a Common Quail. Despite being superficially similar from a distance, the plateau had a higher grass component and resulting increased vegetation coverage, despite being the same age in terms of fire recovery time. Really, the habitat was perfect for Black-rumped Buttonquail, but without any.


We would like to express our heartfelt gratitude to Khayelihle Ncube for use of the superb Rooikrantz cottage in the Groendal Nature Reserve, Brian Reeves and the ECPTA for organising and paying for everything, and of course the rangers who got their feet very wet during the long surveys across the fynbos plateaus. Also apologies to Ben Smit and the NMMU team for being called out under false promises of a guaranteed Hottentot Buttonquail sighting! Still, this site is very likely the end of suitable habitat and hence the range of our enigmatic endemic, and the data gathered will help us immensely in our modelling of range and habitat suitability.