So this will be my new life for the next two years: a conservation assessment of the birds of the Karoo biome. The aim is to obtain population estimates and trends; and identify threats to the 10 or so endemic birds of the biome. The project is sponsored by BirdLife South Africa.

In order to survey the birds in a scientifically rigorous manner, we have partnered with the Karoo BioGaps project, a SANBI initiative aiming to fill the biodiversity knowledge gaps of the Karoo region. The region targeted is that delimited by the shale gas concessions. Information on the presence and abundance of 12 taxon groups are collected by specialists. The taxa range from scorpions, butterflies, frogs etc to plants. Data are collected from randomly selected sampling blocks called pentads scattered across the vast area. Pentads are the core monitoring units of the great South African Bird Atlas Project SABAP2.

This week was the first field trip to test bird sampling protocols, and collect data. On Monday I drove from Blue Hill to Grahamstown to collect my atlasing partner for the trip: Professor Adrian Craig. After meetings with NISC (the publishing company that produces Ostrich: Journal of African Ornithology), I was welcomed into the Craig’s home for a sumptuous dinner.

The rendezvous point for the Tuesday was a pentad on the Rockcliffe farm on the way to Somerset East. Here we were to rendezvous with Gigi Laider, Tony Rebelo and Dominic Henry representing the plants BioGaps team, and all major players in the BioGaps project: Gigi organises many aspects of the project, Tony manages iSpot, and Dom will be doing the data analysis.

Heavy rains had been falling and the dirt roads were very muddy. Water lay in every depression, but the veld looked brilliant and green: the drought of the previous year clearly relegated to history. Larks, Blue Cranes, Southern Black Korhaan and many other birds kept us distracted on our way to the rendezvous point once we’d entered the survey pentad.

The farm owner was very welcoming, and very interested in the BioGaps project and what we were up to, giving us free run of the farm. Since it was already 10am by the time we were heading into the field Adrian and I decided to familiarise ourselves with the birds and building our atlas card by heading to the most southeastern corner of the pentad to a very large dam. We made our way through mixed Karoo veld to the Klein Fish River, where bird life along the Acacia lined stream proved rewarding. Chinspot Batis proved to be the default batis, and Red-eyed Bulbuls the resident bulbuls. Much other wildlife was also encountered along the way including Kudu, Duiker, Vervet Monkeys, Bushbuck, Warthog and Scrub Hare. Signs of Black-backed Jackal, Water Mongoose, Porcupine and Aardvark were also evident.

The dam itself was rather disappointing, with only a Goliath Heron: the water level was very high. The walk back was across typical mixed Karoo veld; open and fairly easy walking compared to fynbos although there was much rickety fence hopping to do along the way. A rather chilled Rock Monitor Lizard proved an interesting distraction. Much time was put into trying to separate the calls of Chestnut-vented and Layard’s Titbabblers, both of which were found, but with Chestnut-vented much more common. 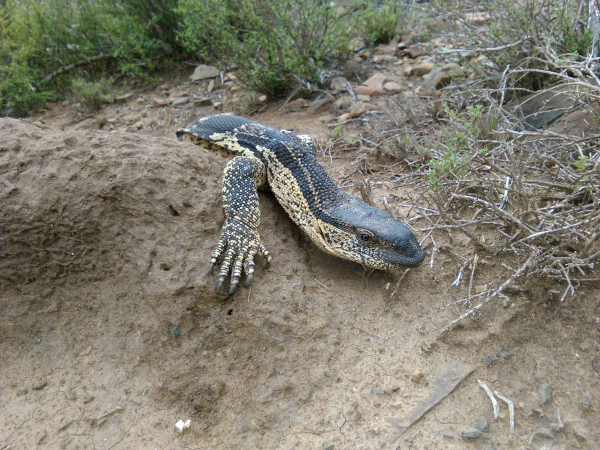 Due to the unseasonably cool temperatures, bird activity persisted throughout the day, and we got back to the vehicle after our 8km slog for a very late lunch. The Rustig Bed and Breakfast on a small farm on the outskirts of Somerset East would provide our beds for the night. Marlene and Sai Botha were very welcoming, as were their pack of collies. We were asked to check for dogs under the vehicle on departure: one of their dogs had only 3 legs due to a previous incident.

A typical just-after-5am departure saw us on site just before 6am, the sun yet to break over the horizon, but with a cacophony of bird calls to sort through on the first point count of the day. I set out for a walk through the veld, while Adrian continued to build the atlas list along the farm tracks. Much fun was had trying to spot Rufous-eared Warblers on their little shrubs, and trying to figure out distances to far off Brown-hooded Kingfisher, Acacia Pied Barbet and other vocal species. Guessing the flock sizes of Pied Starlings and Barn Swallows, and trying to spot displaying Clapper Larks in their aerial displays all proved part of the regular challenges at each point, while keeping a wary eye on the Boerbokke, springbok and other game.

The last points of the morning were close to large lucern pastures, where White Stork and Sacred Ibis prodded their way through the fields, while Greater Striped Swallows scooped up the insects attracted to the purple flowers.

By mid-morning it was time to wrap things up and head to the next pentad. This one was located about 20km east of Cradock on the road to Tarkastad: over a good hour drive away. The drive took us through scenery colourful both in its diversity and in its signs: Daggaboer farm being a particularly memorable one.

The plant team were already busy in the field by the time we arrived at Plankfontein, where again the farmer family was very welcoming and accommodating. While we waited for the farmer to arrive to open a gate to the southern sections where we’d seen a road to a mast, our pentad list accumulated species rapidly, with probably nearly a species per minute.

The large number of large rocks we had to move on our way up the mountain track pointed to how rarely that route was ever used. However, cool and overcast conditions meant there was still plenty of bird action: A beautiful male Short-toed Rock Thrush caused much excitement, being a bit unexpected. Meanwhile, African Rock Pipits called alluringly from higher up, but escaped good viewings, and a half-hearted attempt to capture one in a snap trap.

Summiting the peak required a short scramble, but the return on investment paid back in spectacular views was immense. Being eye-level with a Verreaux’s Eagle is always a memorable event. Pale-winged Starling also made its presence known. However, extensive scans over the plains below us yielded no bustards, storks or cranes; and we had to settle for a resting herd of Mountain Reedbuck. 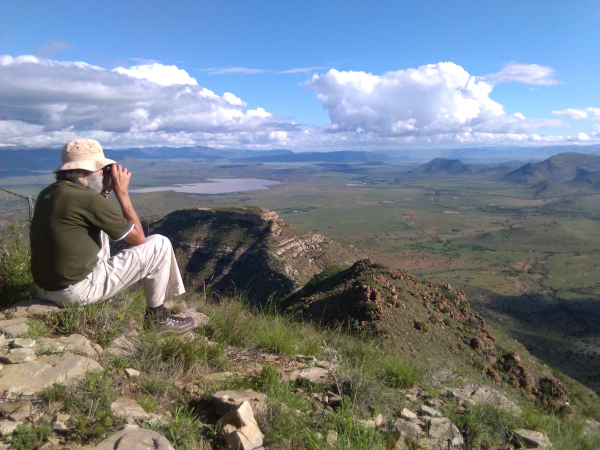 Our accommodation in Cradock was the tastefully adorned Nietgenaamd BnB. Gigi and her team produced a sumptuous almost Banting dinner, except for the potatoes, bread-crumbed chicken and beer. The super friendly and accommodating bnb host Francois prepared us a lovely snack box for our early start breakfast. Soon we were point counting Karoo Scrub Robin, Scaly-feathered Finch and Spike-heed Lark on the Karoo plains. I then left Adrian to continue the atlas card while I prepared for a transect line over the mountains. Black-headed Canary and Lark-like Bunting as well as the expected Cape and Cinnamon-breasted Bunting featured regularly on the counts, with a Karoo Long-billed Lark at the end to wrap things up before the trudge past the Angora goats resting under the Acacia trees on the way back to the farmhouse.

We decided for lunch on the vacant farm next door, where Adrian picked up Dusky Sunbird: the nectarivores being notable by their scarcity up to this point, with no Aloes or much else in flower. A drive into the depths of the farm revealed Mountain Wheatear and a Scimitarbill, which we tracked down due its raptor-esque call.

As we’d encountered very poor water-bird life on the many muddy pans and dams, we decided to head to the Arthur Dam to the south of the pentad. A Hamerkop and Malachite Kingfisher at a stream en-route to the well concealed entrance to the dam were unexpected surprises, but the large dam yet again proved disappointing: it felt like a long-drive for a Cape Wagtail, although shoreline scans did eventually turn up Spotted Thick-knee and Common Sandpiper.


But the bird list for the end of the long day stood in the region of a very satisfying 80 species.

The next scheduled pentad was a 2 hour drive away, and as we had not yet recced it, together with the news that 4x4 was recommended (our non-4x4 Mazda Drifter had proved yet again during the day that getting stuck will be a feature of the adventurous aspect of forthcoming surveys), we decided that perhaps we’d skip that one and do another proper survey of the remaining pentad just outside Queenstown, as we’d be able to join the plant group again.

Our convey of 2 bakkies arrived in Queenstown just after 8am, where we had to wait for the man with the farm keys. Access to this survey site were far less straightforward, with multiple gates and mixed access permission. The farm we were heading to was another vacant farm. On our arrival, the wind had worked its way up to just below gale force, and rain clouds stalked the horizon. I was well equipped for rain as I headed into the mountains for point counts. However, the weather became forgiving, and the birds kept singing, so I kept counting right through until 5pm, the only unpleasant encounter being a dead baby kudu on the way. Wailing Cisticola’s provided a suitable background chorus, while rather subdued Ground Woodpeckers only let out a quick ‘Kia’ to let me know they were there.

Certainly, Karoo bird species were notable by their absence in this most eastern of the survey pentads, much better described as grassland: the regular encounters with Cloud and Wing-snapping Cisticolas as well as Cape Longclaws all testimony to that.

On Saturday morning we wrapped up our atlas list with point counts along the N6, where productive grassland provided a wealth of encounters with granivorous species including Black-throated Canary, Red Bishops, Common Waxbill and Cape and Southern Grey-headed Sparrows.

Then it was the 8.5 hour drive back to Blue Hill via Grahamstown, running the gauntlet of kamikaze Eastern Cape drivers.

Overall, a successful and enjoyable trip: looking forward to the next one!