An early start to the week was hampered somewhat by a car battery made lazy by the cold weather, but luckily that fail was in reach of a charger with extension. My target for the week was to survey three pentads for the Karoo BioGaps project around Beaufort West. The first pentad was close to the area currently targeted for Uranium mining, a farm managed by Buyisile and partners. They run Angora goats for their wool.

After navigating the labyrinth of unmarked dirt roads behind the dusty town of Rietbron, I made it to Tulpleegte. Buyisile made me welcome with a cup of tea, and allowed me to set up camp in an unused shearing shed on the property, as the wind-chill factor was running temperatures down into the blue end of the colour spectrum. The farm had had good rains earlier in the month: the first in over a year. Buyisile told me that the rain had been a make or break moment for them, as the goats had started dying. Now, 10 days or so after the rain the grey bushes were hinting at the green within. I'd spent some time watching tortoises in the mud a bit earlier, and commented on this to Buyusili, who said “Yes, there are so many tortoises sometimes I think this is a tortoise farm and not a goat farm!”

The afternoon survey turned up the usual suspects for a Karoo flat-lands survey, plus some nice sightings of Double-banded Courser. The last survey was near the shed, where a shallow dam added a bit of depth to the birdlist.

After setting up my tent in the shed, displacing a small flock of House Sparrows in the process (sorry okes!) I was able to spend some time enjoying the sunset, serenaded by distant jackals. This gradually gave way to reveal the depths of the universe above. It had been some time since I'd done some star photography, and here is a choice of my favourite pics (all captured with a macro lens made for photographing bugs no less!).

With the thermometer struggling to reach double digits the Wednesday morning, and with some concern about the battery, it made sense to do the first surveys by bicycle. Bird of the morning would have to be a pair of Secretarybirds, warming themselves on top of their Acacia tree roost.

20 point counts for a day, separated 1km apart, puts one on a tight schedule, so once temperatures were up it was back to the old Mazda Drifter to cover a bit of distance across the pentad. Great views of Greater Kestrel were followed by one of the surveys most memorable moments: coming into camp with a herd of Angora goats, upon spotting me they came running towards me. They then proceeded to climb onto and into the bakkie! Some of the more cheeky ones even started nibbling my clothes to see if I was edible! This would have been a great script for a comedy-horror movie. Eventually, realising I was not about to feed them or give them a shampoo (yes, Buyisile does this) coupled with fact I tasted terrible, they wondered grumpily on. 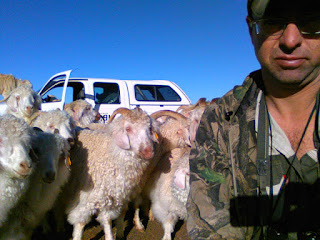 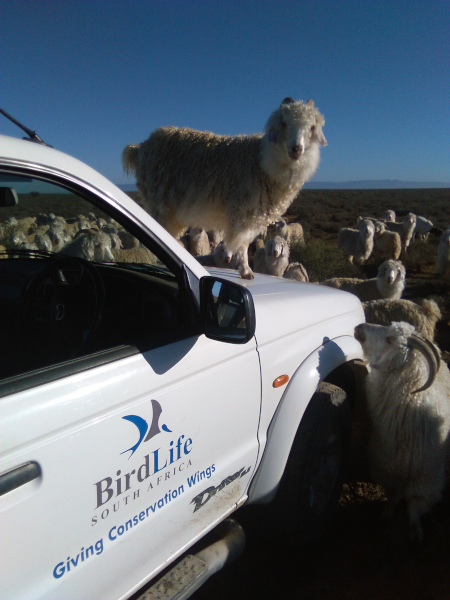 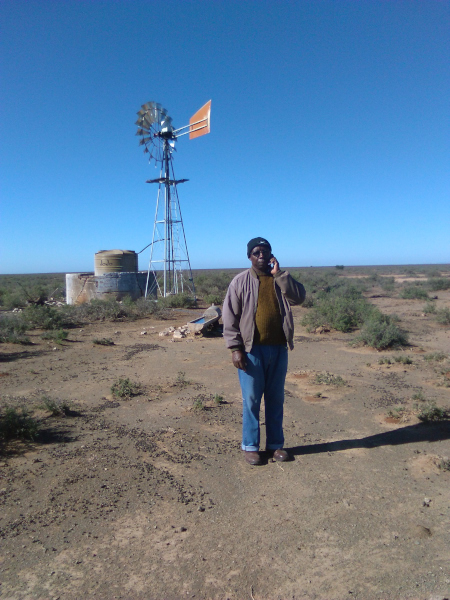 Wrapping up the morning surveys it was on to Beaufort West, for a rendezvous with atlasing addict Stefan Theron. Stefan works for 'landbou' but is a real expert on Karoo birds, having at one time held the record for the most birds in a pentad in the Western Cape. He provided a bunch of hints, tips and insights, and put me in touch with the farmer who owns most of the land for the next pentad I had to survey. As this is bisected by the N1 and public dirt road, I'd been just planning on using those for the survey. I'd later be very grateful for the contact as I'd underestimated the truck noise on the N1, which made the first counts along that route an absolute pain. But that was for the following morning: the afternoon was spent surveying the quiet, southern Hopewell road. While by this time very hot, it was an unforgettable section of road that I will forever remember as Bat-eared Fox alley. At almost every point somewhere in the distance I'd pick up one of these exquisitely cute little foxes X-raying the ground for insects with their enormous ears. They certainly outscored the Aardwolf sighting along that route.

I overnighted peacefully in the Karoo National Park at the campsite arriving late and leaving early, so with nothing to report for the park itself, as I had to hit the northern side of the pentad at sunrise. The quiet of the park contrasted enormously with the roar of the N1: the highway that never sleeps. Luckily for me Ian Murray, the farm owner was around. He very kindly allowed me access to the farm, and also provided one of his farm-hands (Marius) to act as guide and gate opener. Once onto the farm it became clear the rains that had fallen to the south had not made it here, apparently no rains >10mm have fallen here in 2 years. To record anything during counts I had to scan the far distance for Karoo Chats and other perching insectivores.

While the species tally for the pentad would prove to be lower than the 34 of the previous pentad, there was one birding highlight: while approaching one point count location which coincided with a reservoir, a pair of brown, chirping brown things approaching proved not to be Lark-like Buntings, but Sclater's Larks. This is an unmistakeable little lark with a tear-drop marking below the eye, but also one that is incredibly scarcely reported. The birder/photographer will ever begrudge the scientist needing to take distance and behaviour data, because by the time that was done the birds had finished drinking and flying off to be engulfed by the vastness of the Karoo.

Wrapping things up, and with a new battery providing a bit more confidence in the Drifter bakkie, it was off to Klein Waterval. This farm, in the shadow of the Swartberg mountains had just been purchased by Adriaan Nortjie of Caroluspoort Game Farm, and they were waiting for me. Armed with gate key, a cup of coffee and chilli-biltong, all kindly provided by Adriaan, it was into the rough and hilly terrain of Klein Waterval. The terrain was in stark contrast to the flat and almost featureless pentads of the previous days. By the following day I had to count it as a minor miracle that the sharp shale rock and spear-like Acacia thorns had not resulted in a puncture.

For the evening I'd booked into the Groot Waterval guest farm not too far away (although a glance the wrong way at the wrong time meant missing the sign and getting lost, negatting that particular benefit). Now, if you are considering a Karoo holiday I have to strongly recommend Groot Waterval, not too far from Prince Albert. The hospitality was exceptional: I was invited to have dinner with Danie and Narina Le Grange and their son Terblanche; after which I felt like part of the family. You can find them here: http://www.grootwaterval.co.za/.

Friday morning was the wrapping up of the Klein Waterval pentad. Despite also having received the good rains (that washed away the Swartberg Pass just past Prince Albert), I was surprised again by the low species count, this time the lowest of the three pentads for the week at 29. By contrast, surveys in the pentads from March had provided species lists generally over 60 species. In general, granivores were scarce, with another bird noteable by its absence being the Lark-like Bunting. Here, perhaps due to poor summer rains, there was an almost complete absence of grass across the pentads, which might partially explain this. So: its not only if you get the rain, but also when you get it, that appears to be important for determining species richness in the Karoo. It is also clear that in order to maintain the unique species community, that vast areas will need to be maintained in near-natural state in order to provide the resources to those species that have to track resources in space and time.

And lets wrap it up with some bird shots...