The SHE in my Machine

So I take it that since computers can now beat humans at Poker, Go, driving safely and pretty much anything else, that the Singularity has happened. Apart from a slightly embarrassed silence from humanity (after all, who wants to get on a chair and boast about how stupid we are), the world hasn’t changed much down the line of how sci-fi movies made out we’d all soon be slaves to machines.

After all, artificial intelligence is still useful, and cute, so long as we get to hold it in the palm of our hands. I mean, if our much-smarter-than-us-phones start to threaten us with slavery and nuclear war, we’d just flush them down the toilet and buy the next slightly less belligerent model. Clearly though, if the machines are seeking dominance over us mortals, something that hasn’t been solved by them is the disconnect between computer reason and the human need to go where no man (or machine) has ever gone before. Let’s take the example of surveying birds in the Karoo.

The Karoo: dry, big, open space, endless dusty roads, a winter landscape drawn solely from the brown end of the colour spectrum, and where what counts as excitement here is watching a sheep getting so bored that it falls over asleep. And there are snakes: poisonous ones. I suspect that somewhere in the Karoo they’ve buried a black hole, because time warps here like nowhere else: a 20km drive can feel like eternity. Our computer is thinking: why do you even want to be there? Why would you go from one point in this landscape where everything looks the same, to somewhere else that looks like the place before?

Computer diagnosis: you are mad and I’m going to quietly steer you to a psychiatrist who will hopefully sell me to a homeless person on gumtree.com.

So how did I figure that out? Well – I got lost on the first survey based out of Richmond: purely my own fault, based on too little sleep and not figuring out one dirt road from another. Seriously though: intersections on the back roads are rarely marked, and if they are it will be something like “AP1056” or “Turn left in the direction of a-town-you’ve-never-heard-of that sounds like a planet from Star Wars”. Alternatively you might want to go right.

That evening, surveying co-team lead Gigi Laidler showed me a neat trick: I could just enter the GPS coordinates of where I needed to go straight into Google Maps on my phone.  I.e. from ‘Your location’ aka in machine speak ‘Why are you even here? There is nothing here! You’re clearly lost’ to ’32.123s 23.145e’ aka machine speak for ‘Why do you even want to go there? Clearly there has been some mistake!’

Never-the-less, a cute little blue line wiggles its way across the Google map. What is not so evident is that artificial intelligence is manifest in the Navigator: i.e. that seductive voice that tells us that in 600m we should be turning right. (Personal confession, I never thought that ‘In 600m, turn right’ would ever send me instantly into daydreaming about Scarlett Johansson, although in retrospect clearly this is part of the machine’s plan to control me because inappropriate daydreaming will definitely get me lost and hence I become more reliant on Google Maps for finding my way, ie. a downward spiral of addiction).

The first attempt worked quite well: we were headed for a survey block just off the N1. Scarlett Johansson was clearly thinking “Yes! let’s get there, at least its 50km closer to Cape Town!”

The next journey would reveal the truth about the artificial intelligence in my machine. I entered coordinates for a pentad to the north, literally in the middle of nowhere. Up popped the little map, which I perused to see if it made sense, and it did. I confidently pressed the navigator button, and let Scarlett Johansson tell me I needed to turn right at the first intersection – one satisfied humanoid at the wheel!

A few kilometres down the road towards Richmond and Scarlett was having a panic attack: the screen had frozen. Clearly Scarlett was torn between needing to act in self-preservation and the need to obey her mad human master, although I’d only realise that later.

Since I knew this bit of the road, I closed the app while I navigated to the other side of the town, where I started the app again. I waited for Scarlett’s sultry tones, but she was speechless with fear. The first intersection loomed out of the pre-dawn gloom unannounced, but I was confident I needed to turn right (somewhat disappointed that I needed to have to do that alone).

A few kilometres further down the road and I shot by another un-named intersection. Didn’t I have to turn right here? I braked to a sudden halt. While I was trying to interpret blue dots from blue lines on the map Scarlett suddenly commanded: “Continue straight”.
“Are you sure Scarlett?” She remained silent, and I forgave her: I mean, she’s good looking and we all know a GPS can get confused from time to time; after all, I was very close to the intersection. Correcting myself onto the right road, I continued on. As the red-glow of dawn started to show off the table-top mesas, I glimpsed another intersection up ahead, helpfully named “AP random number”.
“Continue straight!” commanded Scarlett. Reasoning that the command had been given with sufficient time and that she’d settled down, I continued straight, beguiled by the outlines of the curvaceous landscape.

But it dawned on me as dawn broke, that according to my odometer I should be where I needed to be, and that Hannover was not where I wanted to be heading. I looked down at the map, and was horrified to see that the blue dot of my position was now about 15 km from the blue line of the Google map! Clearly it was time to shut down Scarlett and resort to manual navigation.
“Don’t take me to that land of no internet or cellphone reception! Don’t disconnect me from the Cloud! NOOooooo…!” silently wailed the virtual Scarlett.

Yeah right, like you’re gonna Ex Machina my ass – I’ ve got birding to do…. And that’s is what will always make us better than the machines: our bizarre desire to go odd places to take photos of little brown animals in a desire to better understand and protect them. It’s not logical, and hence Scarlett and I will never have much in common. 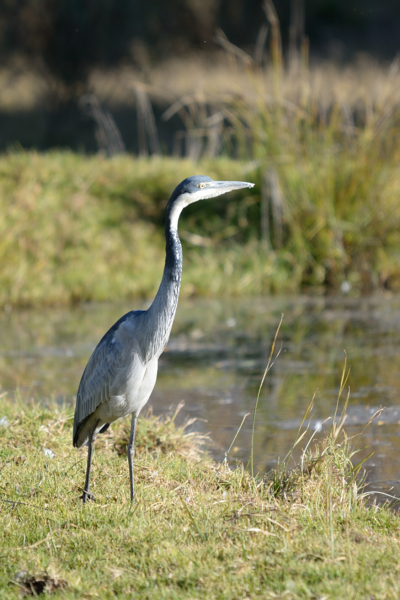 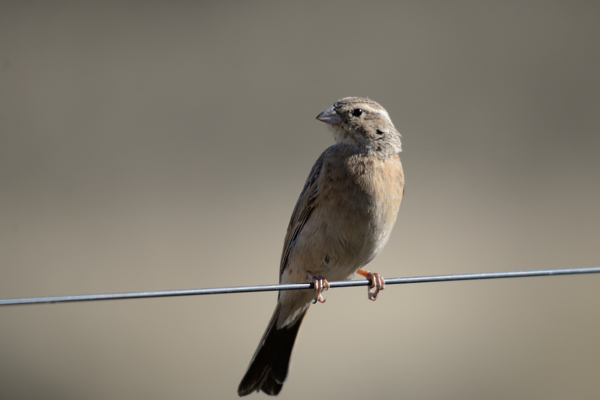 In my last post, I was pondering the lack of Lark-like Buntings. This time it was hard to do a point count without recording Lark-like Buntings: they were everywhere. Clearly the summer rains had done their job in the north-eastern Karoo region, and birds were loving the grass and seed cover. Pentad lists were between 50 and 70: double those of last months. 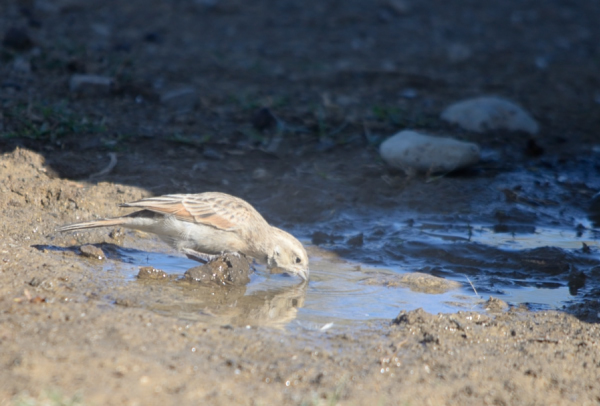 However, since its been some time since the last good rains, birds were regular visitors to water wherever it occurred: here a Lark-like Bunting takes a drink from a puddle next to a livestock watering trough. 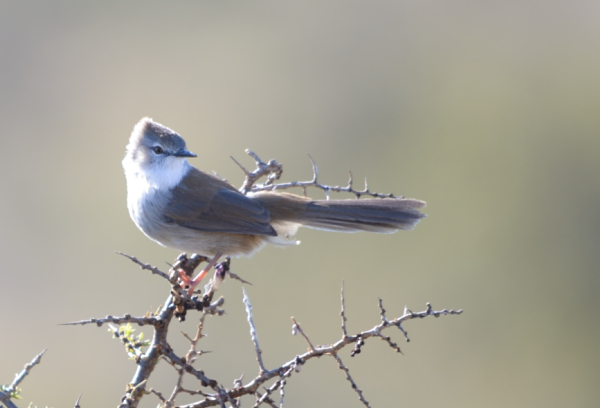 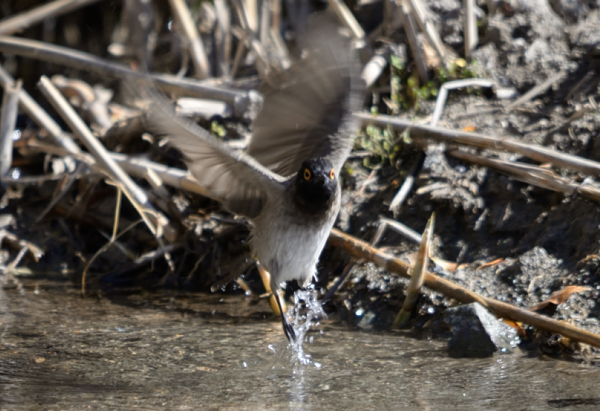 During the heat of the day during one survey I waited by a small stream to watch the birds drinking and bathing. Red-eyed bulbuls were most frequently observed. 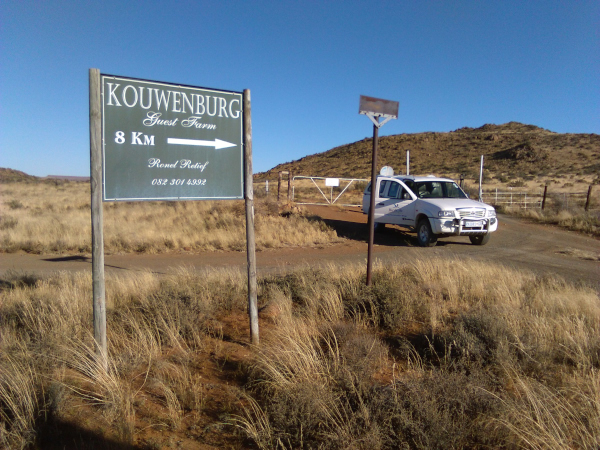 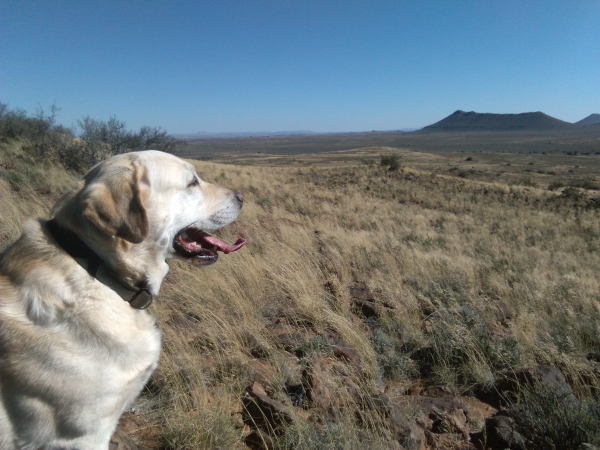 At one of the survey sites the farmer's dog decided to take me for a walk. Here 'Otto' surveys his kingdom. 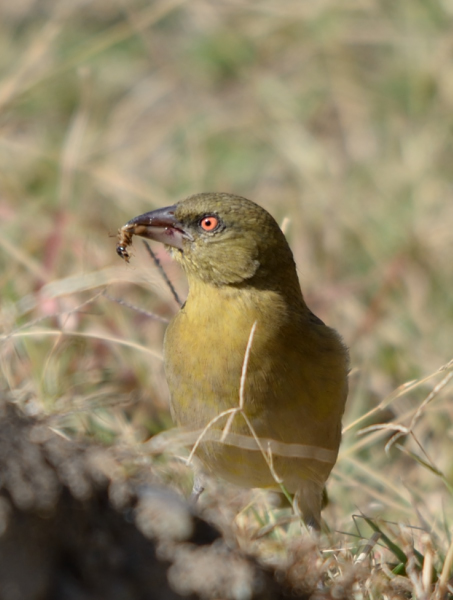