Further surveys out of Grahamstown had to be cancelled due to gale force winds this week. Still, Wednesday morning Adrian Craig, Lynette Rudman (Eastern Cape Bird Club), Diane and myself headed out somewhat optimistically. Our destination was Fort Fordyce Nature Reserve, managed by Eastern Cape Parks and Tourism. This well signed, well looked after, quiet, forested reserve is quite a contrast to the Darlington Dam campsite.

We were warned on entrance that strong winds had already brought down two large trees, and we should park away from anything that might topple onto us. Ringing, our mission for the morning, was out of the question. Instead we went for some walk into the forest, where the trees did offer some shelter from the howling winds, but where birding was very quiet.

The birding highlight of the day would come late that afternoon on our way out. Lynette had some inside information that Cape Parrots were at the Baddaford farm stall. Sure enough, flutters of green and squeaks could be heard from the Pecan nut grove, and Lynette got us permission to head down a bit closer. The birding highlight for my day would have been the juvenile Crowned Eagle perched right overhead and that provided excellent viewing. But that would be eclipsed when eventually the parrots emerged en-masse from the green foliage. We’d been a bit disappointed when our trajectory to the pecan-nut grove had been cut off by an electric fence. As we stood wistfully wishing to get closer, trying to catch a glimpse of anything in the trees, suddenly the calling volume started to pick up. It was evident that there wasn’t just a small party of parrots here, but quite a few. However, none of us were prepared for the irruption of 160 parrots from the grove of trees that was no more than 100m long.

The parrots whirled and swarmed, many then settling in the large tree near us. The appearance of a Black Sparrowhawk caused further chaos to the clammering flock. Eventually, with the sun having disappeared from the valley, the flock took off and headed away, presumably in the direction of Hogsback, well know Cape Parrot hotspot.  Smaller groups were then observed coming down the valley, presumably from further off. The whole experience was stark contrast to my first efforts to spot Cape Parrot: I’d spent three days camping near Stutterheim just for a sighting of a pair flying high overhead. The Cape Parrots of Baddaford experience was a lot more reminiscent of the claylick experiences of the Tambopata River.

With the estimated population somewhere around 1500 birds, that we had seen roughly 200 (10 – 15% of the population), was a very very special experience. 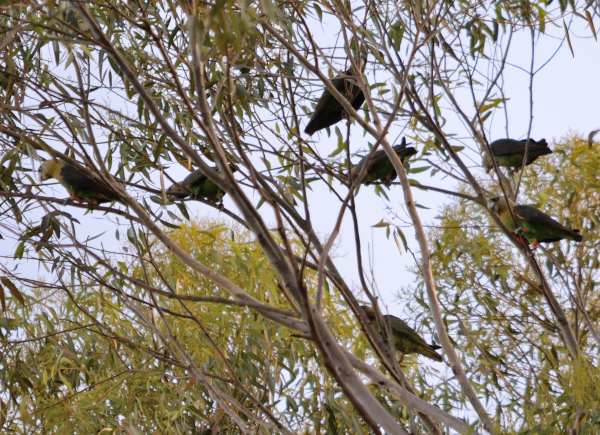 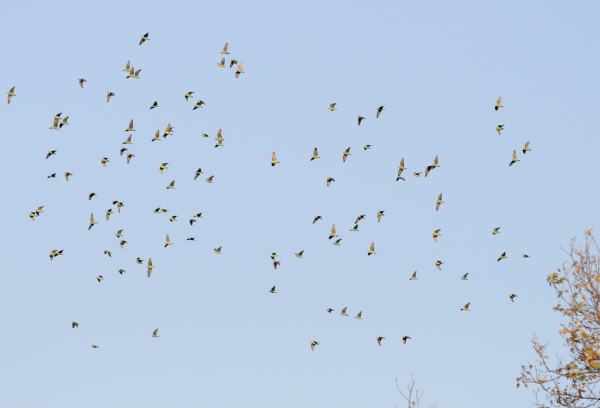