It was only fitting that the day before we headed off for the 2 weeks of surveys of the birds of the Karoo, it should snow. Not enough snow to break the drought, just enough to remind us it is winter. Needless to say, the old Mazda Drifter did not appreciate the weather, and it was a slow start on the Monday. On the drive to the Karoo National Park, snow still lay on the higher reaches of the Swartberg Mountains. A lunch-time spot on the northern side of Meiringspoort would normally see one seeking the shade of one of the ragged Acacia trees: not this time. Anja and the kids and myself stood around the only picnic table in the sun, hopping up and down to stay warm. 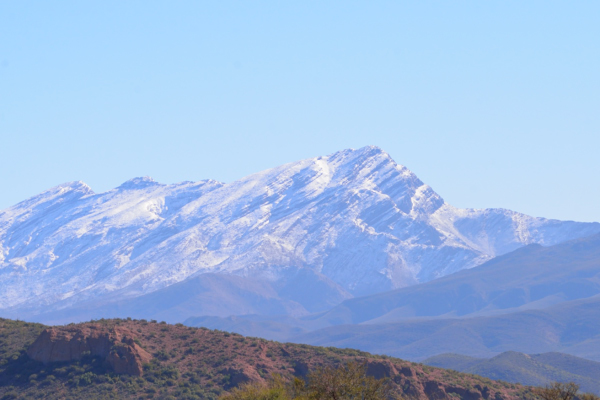 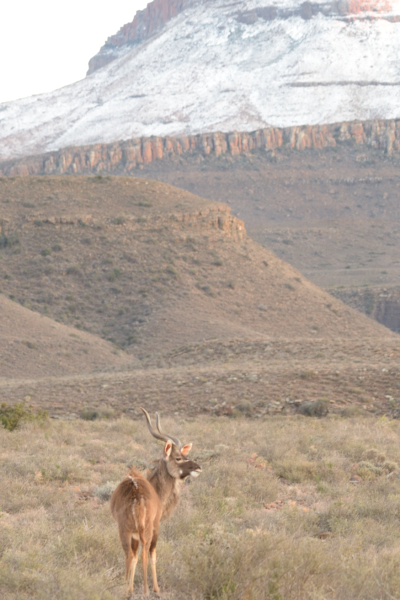 The destination survey pentad in the park was just to the west of the Afsaal cottage, but we’d broken the journey with one night in the main camp so I could finish off some point counts on the Bulkraal loop. Snow also lay on the escarpment mountains, and also still under the bushes going over the Klipspringer pass. Never-the-less, the camp cottages have heaters and sufficient blankets to keep you warm: it was lions roaring near the campsite in the early hours that had me awake earlier than expected.

I’ll have to say that knowing the Afsaal cottage was off-grid had me a little bit nervous: certainly there would not be the luxury of plug in heaters. However, the quaint one room stone cottage had thick walls and a gas fridge, which kept the room very warm. Again, plenty of blankets and hot-water bottles meant one tended to wake up too warm rather than cold. 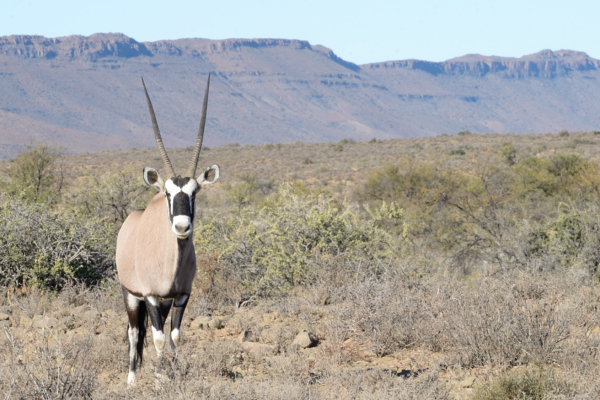 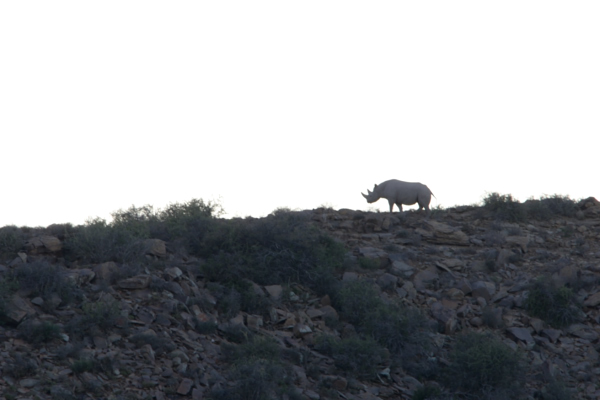 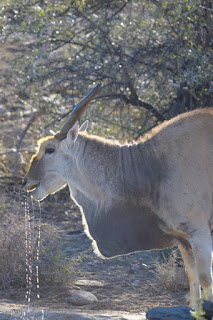 Several tracks (classed as 4x4 but not really) make their way over the ridges, plains, and drainage lines of the surrounding area, making for easy surveying. The generally dry conditions meant that bird densities were low, and none of the 4 pentad cards we finally submitted for the park would have more than 35 species. Anja did most of the atlasing while I drove. However, the Afsaal pentad provided some excitement with sightings of Kori and Ludwig’s Bustards, plentiful numbers of granivores drinking at the water-holes, and a skittish Black Rhino. Getting close and personal to the Mountain Chats at the cottage was pretty special too.

Next stop in the survey was a visit to Abraamskraal via Beaufort West, where some recently made friends had offered us a stay in their ‘jag-huisie’, which was really a fully kitted house. The presence of a farmstead in a pentad always has a major impact on bird species richness. After 2 nights, despite no dam for waterbirds, we’d tallied 50 species. To do the point counts, I’d hiked 18 km to include the local mountain, Perdeberg. Cool weather made for easy hiking, and cross country hiking through Karoo is hardly ever an issue with sparse vegetation cover.

The drought going on here is bad: it’s the worst rainfall year in around 40 years, and the worst of the current 3 year drought. The Karoo bossies are only just holding on and it’s a vasbyt year for everybody. Up until now, not a single pentad anywhere had recorded any nectarivores, and insect life was scarce, even on warm days.

I don’t think one can really know the Karoo unless one has spent the coldest time of year in what is generally recognised as one of the coldest places in South Africa: Sutherland. Despite being just a small ‘dorp’, with only a couple thousand inhabitants, it is a town everybody in South Africa knows by name and reputation: it is always the coldest place on the evening’s weather forecast. The previous Sunday, the maximum temperature for Sutherland and been 2 degrees. 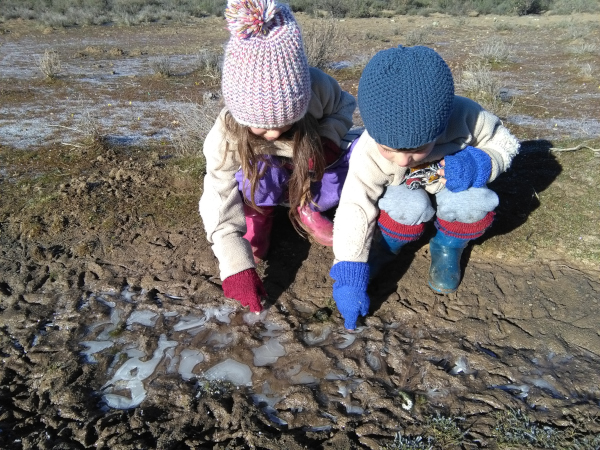 We had booked ourselves into the Gunsfontein gastehuis, being one of the few places that were able to offer 3 nights of accommodation at a very reasonable rate during the holiday season. This is a rather large historic house, with fantastic sunroom. However, it is pretty cold: week old snow was still all over in the shaded reaches. The hosts, Lynette and Andries Muller, were very friendly and accommodating: giving us a hand to start the car on the Sunday morning after another cold night. Glow plugs probably need replacing is the verdict.

With no cell phone reception anywhere for miles, it was a bit hard to make plans. With the morning gone, we headed south towards the escarpment to bird the pentad. A series of dams held interesting waterfowl: lots of Yellow-billed Ducks, Spur-winged Geese, and a Cape Teal. The escarpment views were amazing: views west over the Tankwa-Karoo to the Cederberg, and south to the Swartberg.

The Sunday afternoon I headed out with the kids to explore the Biogaps pentad I was supposed to be surveying. Luckily, a service road runs through the pentad, so we managed to make a start with the point counts. Bird life was noticeable by its absence, although weather conditions were perfect: warm and still. It was to be a trend that would continue, making it one of the quietest pentads to date, over the 3 days it would take to complete the surveys. Monday morning glow-plugs were replaced, resolving the slow start in the mornings issue for the Mazda.

Next stop Tankwa! I’d been hoping for Cinnamon-breasted Warbler on the Oudeberg Pass, but a howling icy wind meant no chance of getting out the vehicle without one’s pants blown off. We had to settle for the legendary spectacular views instead.

The next pentad was centred on the Tankwa Guesthouse, run by SANParks. Very nice, made all the more special that we had the place to ourselves. The pentad includes a massive dam, and two days here cracked 80 species: so much for the horror stories of some of the lowest atlas cards coming from the Tankwa! Tractrac chats and Thick-billed larks, with scattered flocks of Red-capped Lark and Yellow Canaries were the main fodder of the point counts. Two along the dam took about an hour apiece, with literally hundreds of waterfowl to scan through of virtually all species found in the bird book. 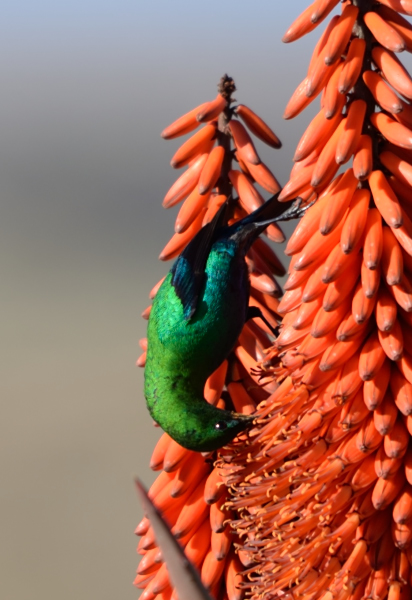 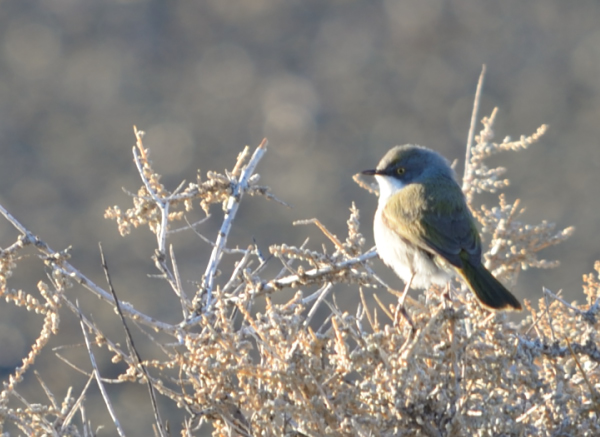 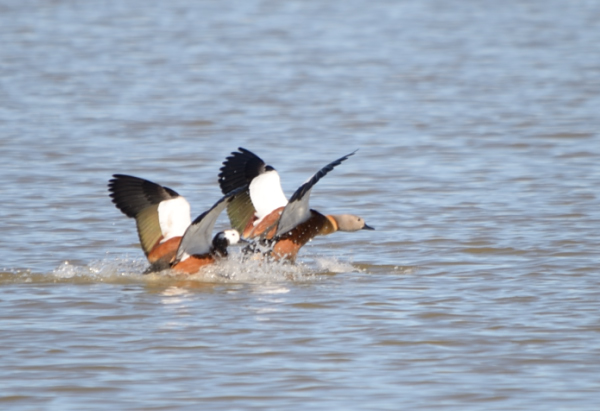 From the south of Tankwa, it was a good long, slow drive to the north of the park and the Elandsberg cottages. Again, rustic luxury might be one way of describing the accommodation here: cobb and stone walls, no electricity, gas showers, and a plunge pool. The cottages have great views of the escarpment, surrounded by thick succulent Karoo bushes. The birding had a slightly different feel to it: Karoo Larks and mountain birds making up the bulk of the counts.


At this stage it was time to head home, which we did with 2 nights in Anysberg Nature Reserve. As it was Charlie’s birthday I decided to not do any counts, but just atlas. That gave us a chance to do the Tapfontein 4x4 route as well as the hike to the waterfall. It was rather amazing to walk up a dry riverbed for over 1km and then come to a waterfall with natural plunge pool! 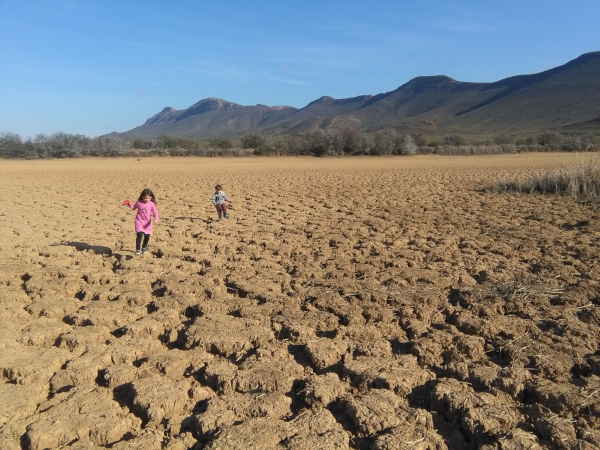 Of course, the fun never stops, and with the family safe at home I’m now in Murraysburg and point counting again.