Is deforestation resulting in rabies outbreaks in KZN?


Ever since I had to go for rabies treatment after being bitten by a bat under suspicious circumstances in Peru, rabies has held a certain fascination with me. A fruit bat had been reported in some-ones’ room in a jungle lodge where I was doing research. It was hanging on a bedside table, looking around and panting. I presumed it had been injured by staff clearing bats out of the ceiling, so I’d caught it in a pillow slip and walked it outside. I’d then attempted to release it gently to check for damage, but it scuttled out of the slip, turned around, sunk its teeth deep into my thumb, and then flew off: certainly not injured.

There had been some stories of gold miners who had died of rabies doing the rounds, so off it was to the local hospital. I’d like to joke that the week-long series of injections into my abdomen were worse than the disease: but that really isn’t the case here. Rabies is pretty much 100% fatal once symptoms display. I’ll never know if the treatment was for nothing, but I’d certainly not want to forego the treatment to find out.

This year, several people have died from bites by rabid dogs in South Africa, with several reports of rabid animals having to be put down. But how are these dogs getting rabies? The unwritten assumption of the reports is that there is low levels of rabies within dog and cat populations, but I find this rather unlikely: most cats and dogs die within 2 – 4 days of displaying symptoms, which is the only active transmission period. All cats and dogs die within 10 days.


But what we do know is that bats can also carry rabies, and although they also die rapidly once symptoms show, it has also been show that rabies can hibernate with bats, so rabies is able to persist over seasons within bat colonies. In addition, there is good evidence that bats are hosts to other scary diseases like ebola.

Now generally, bats are harmless creatures and carry on their lives rather independently of ours. They fly around, eating insects (which of course carry many more problematic diseases like malaria and yellow fever), pollinating flowers, dispersing fruit, and generally being very ecologically useful. That is, if their roosts and habitats are undisturbed. However, many bats roost in trees and utilise forests. So, if these are disturbed, then disrupted colonies will need to disperse, like refugees. These situations increase the risk of unwanted contact (from both species point of view) between bats and humans.

There are a lot of reasons for deforestation in South Africa, but one industry has popped up a couple of times on my radar independently.

Firstly, researchers at the University of KZN mentioned earlier this year that they had lost some of their indigenous forest study sites, where they were monitoring a range of species using camera traps, by farmers clearing land for macadamia nuts. Independently, a cousin of mine living in Port Edward spoke about a farmer who had lost his land in a land claim, but had been compensated, and then bought large tracts of unutilized land full of forest that he had cleared for macadamia nuts. By their own admission, the Macadamia nut association boasts of rapid growth in their industry. However, contribution to total forest loss is not quantified and may be small.

Certainly, at this stage I cannot say that the rabies is linked to deforestation, but there appears to be a smoking gun here that needs further investigation by South African authorities. At the moment, we may be treating a symptom, not the disease and human lives are at stake. 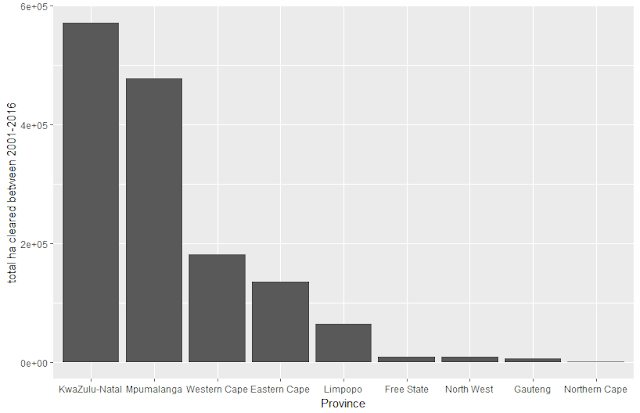 Thanks to Jamie Carr for assisting with the data for this post.