The Winter That Wasn’t


I’ll have to admit, I was a bit nervous starting the big Karoo surveys in the middle of July, and thus theoretically the middle of winter. Certainly, cold was on my mind as I passed the snow-capped Swartberge on my way to Cape Town, especially since much of the trip is camping in remote locations; but my other concern was that I would be too early for the birds. But it’s a big area to cover with an ambitious target of point counts to complete, thus needing lots of time, so an early start was needed. Turns out so far, I’ve been wrong on both accounts: temperatures have been mild to hot, hitting 30C at Vanrhynsdorp; and birds have been prolifically active and showing many signs of making the most of the ‘early’ spring. Cape Weavers defending nests, Red and Yellow Bishops in full breeding plumage, and some migrants are already here: Common Quails calling from the pastures, a Klaas’s Cuckoo, and Alpine Swifts dancing in the hills. Lark calls have filled the air all day all month, making every 10-minute point count a flurry of activity from start to finish. At some stage during the winter survey the temperature may have fallen to 9 degrees, but certainly not much less. 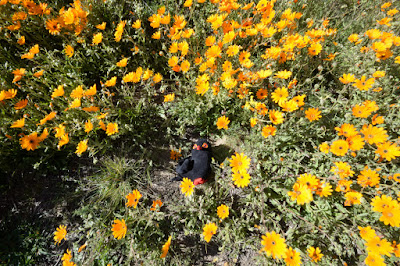 The target is to conduct 20 point counts across 60+ pentads (survey blocks of roughly 80 square kilometers), stretching across the range of the major Karoo endemics, with a focus at the moment being Cape Long-billed Lark and Karoo Larks. Both were certainly plentiful in our first coastal pentad towards the south of Namaqua National Park. To do the 20 counts in a pentad in a day, I share the load with field assistant Eric Herrmann, each of us do 10 counts on different routes, one in the vehicle and one on the bicycle or on foot. Points are ideally 1km apart. The afternoon is for travelling to the next pentad to do it all over again.

Birding highlights so far have been a Cinnamon-breasted Warbler in the Taaiboschkraal campsite near Kamieskroon, and birds feeding in Kruidjie-roer-my-nie flowers. Other wildlife has included Meerkats among other game, but certainly the highlight was an African Wildcat. I was cycling through the white sand dunes (or rather pushing the bike through them), when I noticed fresh cat tracks over our vehicle tracks from earlier in the morning. Shortly after I had to stop for a count. I climbed to a dune top for a view; and noticed Karoo Larks and Chat Flycatchers paying a certain bush a lot of attention, which was attracting a lot of other birds too. After my 10 minutes of recording the hectic activity (the spot seemed to be visited by every bird in the vicinity), I approached the bush, and sure enough, an African Wildcat burst from cover and disappeared in a few bounds over the dunes and out of sight. 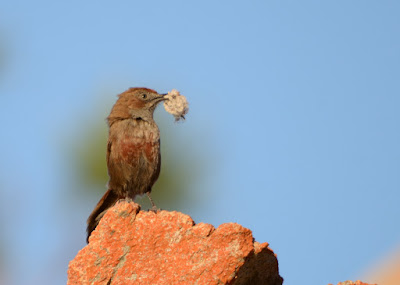 Certainly, part of the bird activity has to do with the rains this year, together with the temperatures. The region experienced some late summer rains, and then good early winter rains in June. Compared to surveys in the drought-stricken regions last year, the veld is fresh and green this year. So, the flowers were out starting early July: but then came the strong north-easterly winds. These are the hot winds in this area. As such, many of the people we spoke to were concerned that the early flower show would also come to an early end, and certainly there were signs of some of the plants showing stress: wilting and missing petals. The main tourist season for the flowers here is August to September, which could mean some people will be too late: unless some follow up rains occur.

By the time we hit the old mining town of Kleinsee, the winds had died down and weather was cooler again. Some were heard to comment that they were glad winter was back!

Then, leaving Port Nolloth at the end of July, suddenly winter, very definitely, WAS.