The week leading up to the Brandvlei atlasing bash started with another cold front that brought ice rain to some parts of the Bushmanland: one land owner showed a video of hail-like snow and family and friends were sending pictures of children playing in the snow in Uniondale. For me, surveying out of Kenhardt, I was lucky. I only had occasional sleet to deal with and an icy head wind. My turn on the bike, and certainly freezing to start off with. At times like these, the body is shouting ‘No, what are you doing, this isn’t good for you!’, but soon realises there is no get out clause and kicks into survival mode, and you get used to it. By the time Eric picked me up around lunch time, I was so used to it that getting into the bakkie my skin was tingling due to the unexpected warmth in the cab: 15 degrees.

Having seen the weather report the previous evening I’d decided to put a hot water bottle into my sleeping bag as I suspected I’d wake up with ice on the tent, and I went to bed with thermals and jacket. At around midnight I woke up, boiling to death, and had to toss out the hot water bottle and strip off my jacket. After this much time, Eric and I are apparently well cold acclimatized.

Brandvlei Birding Bash aka An absence of Sclater’s Lark

By the time we got to Oom Benna’s just outside Brandvlei, the first atlasers had arrived. Mel Trip, Otto Schmidt and Simon Fogarty, seasoned veterans of the Cape Bird Club, had driven up from Cape Town to fill some holes in the atlas coverage. Chris Cheetham from the Overberg Bird Club joined us too, in his quest for a Red Lark. Dale Wright turned up a bit late: rather worryingly with vehicle issues in the vehicle that we would be assigned for the rest of the survey. A rather strange eccentric character of the Mazda Drifter bakkies is that you cannot pop the hood if the key is not registered in the ignition: which can also happen if the battery is flat. In this case, a loose terminal meant that Dale had to call in the AA to jiggle open the bonnet. Last to arrive were Stefan and Madeleine Theron with their 3-year-old son Jacques. His favourite bird is an owl, which I think is a good choice, and Stefan would also be looking to twitch Red Lark.

There were three big reasons I’d wanted to spend some time based out of Brandvlei and had suggested the atlasing bash: firstly, to improve SABAP2 atlasing coverage and a wish for other people to share in the awful ORFS (out of range forms) that every single card that is submitted for the Karoo generates;  secondly, sightings of a Karoo Lark with Red Lark features south of Brandvlei needed to be verified; and thirdly, to try get some more Sclater’s Lark sightings for the survey.
A bonus reason was to get Dale Wright to join the survey to do some cooking for us: Eric and I are totally rubbish. As it was, the experienced Cape Bird Club members basically carved up the surrounding area between them to survey, and I had to do no organising in that regard. Chris would get his Red Larks in every pentad that he surveyed with Mel Tripp, who was clearly a lucky charm because he’d also organise a Red Lark sighting for Dale, rather pleasingly of a very heavily streaked Red Lark i.e. a Red Lark with Karoo Lark features. Stefan unfortunately would not be so lucky, choosing to head north of Brandvlei, where none of any of the rest of us would encounter Red Lark either. Basically, Red Lark is rare north of Brandvlei, with Mel’s encounters mostly west and south. Both brown and red forms were seen, on several occasions in the same pentad: certainly these are a form and not a subspecies as thought once upon a time.

But what about the Sclater’s? Up until now, with nearly 100 pentads covered over the last 2 years, and close to 2000 point counts conducted, I’d encountered Sclater’s Lark a total of 5 times. The road between Brandvlei and Kenhardt is a traditional twitch stop for those wishing to get Sclater’s Lark on the list, and I was relying on this area to provide the encounters that would be required to calculate density estimates, and from those, a population estimate for this southern African Karoo endemic bird species, which is currently listed as Near Threatened according to the Eskom Red Data book. Bird books describe the species as being sometimes the most numerous on the gravel plains of this region, and also indicate that they drink regularly. Not only were none seen during point counts over the five days, but none were seen by us hanging around hopefully at the various drinking troughs in the area, nor by any other member of the atlasing bash either. Raptors, except for Pale Chanting Goshawk, were also noticeable by their absence, a sentiment echoed by statements from farmers like ‘The Martial Eagles used to be here, but they are not anymore’. What were common were both Grey-backed and Black-eared Sparrowlarks; and Lark-like Buntings were exceedingly abundant.

Throughout the four days, count conditions were cold at first, but warmed up pleasantly during the day, allowing for comfortable counting and respectable lists. On the last day, it would be my turn on the bike again. Eric dropped me off at the edge of the pentad, and the plan was that I would rendezvous with him at the edge of his pentad, to try save on fuel. The day started with jacket on with temperatures around 6 degrees. A couple of hours later it was 16, then 26. By the time I hit midday it was touching 30, with the highest temperature 33 courtesy of a stiff berg wind. For the first time this year I was seeing birds taking behavioural action to reduce temperatures: a Chat Flycatcher wing drooping to aid air flow around the body; and Lark-like Buntings seeking the shaded bushes, embankments, and even hiding under a bridge.

My behaviour to deal with the heat involved stripping off my jacket, track suit pants and gloves. I didn’t want to carry these on my bag, so I’d tucked them behind the railings where the road to Granaatboskolk I was surveying crossed the Sishen railway line. There is little road traffic here: maybe a vehicle every half an hour. An hour or so later I was surveying about a kilometre away, when I noticed a truck stop on the bridge. Someone got out and headed down the embankment to take a dump: basically down where I’d stashed my cold weather gear. Of course he found my stuff, and must have thought it was his lucky day. I had to jump on my bike and sprint the 1km to the truck to claim my clothes. The dude must have wondered where the hell I’d come from… certainly he was rather surprised and apologetic, having not seen a soul anywhere in the barren, desolate landscape.

Overall, it was great to hang out with bird-head people for a few days, listen to their stories and perspectives on birds and birding. Certainly it was useful, as in this case many eyes make light work. While we did 30 plus virgin pentads, there are hundreds more in the Great Karoo that need doing: so head on out there and claim your own virgin pentad – SABAP2 never forgets a first.

Lastly, A big thanks to all the landowners that let us visit remote areas of their farms to document the bird life. 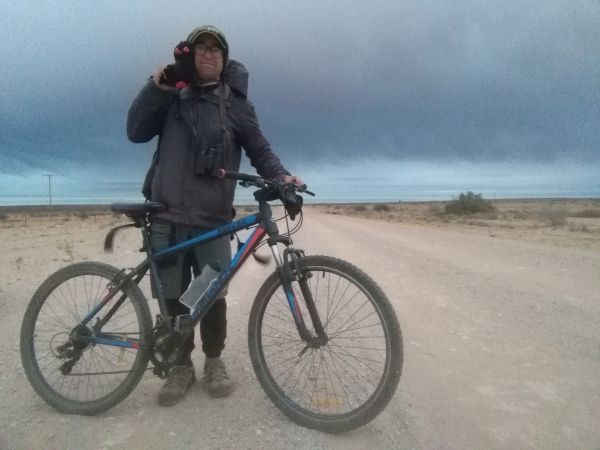 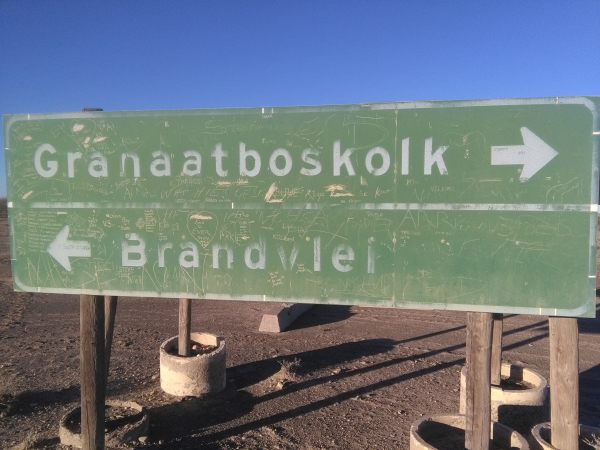