The Riverine Rabbit has always had a mystical status for me growing up in South Africa: I remember it occasionally appearing in WESSA or EWT magazines, described as this species that was so rare it could soon be extinct. Fast forward 30 years or so, and I’m living on the Blue Hill Nature Reserve on the western edge of the Baviaanskloof Nature Reserve. I’m very used to hares here (although until now still struggle to tell a smaller Cape from the larger Scrub in the field), and have also encountered many Red Rock Rabbits, with their distinctive red tails: in fact I was tracked down to have a photo of one of these included in a field guide of Mammals of Tanzania because at the time photos of this species were so rare! But no Riverine Rabbit, that I could be sure of, and they were not on my radar: one night after driving home from Willowmore after seeing what I thought could be one, I saw from their range map that they were not thought to occur anywhere near my part of the world. I shelved my expectations of spotting one.

More recently, with two years of a contract for BirdLife South Africa across the Karoo just completed, Riverine Rabbit were back in my mind. During this time, I’d co-incidentally crossed paths with Bonnie Schumann, lead field agent for the Endangered Wildlife Trusts’ arid zones program at a farmers’ meeting near Victoria West. She stuck me as a person ‘in the know’ and I’d make efforts to look her up again whenever possible as I criss-crossed the Karoo. Now, theoretically in the range of the species, I was becoming a lot more aware of what to look for. Part of this was having Eric Herrmann as a field assistant for a while, who had participated in Riverine Rabbit monitoring. However, each rabbit/hare photo I managed always resulted in the same shaking of the head. Co-incidently, my other field assistant was Campbell Fleming, and his girlfriend (Zoe Woodgate) is doing a PhD on Riverine Rabbit, on the previously most recently discovered population around Touwsrivier/Sanbona Game Reserve.

So it was, on the eve of my wife’s birthday on 20 December 2018, the family were heading to Baviaanskloof for a camping weekend away. We were approaching the Acacia karoo dominated drainage line close to where I’d thought I’d seen the rabbit a few years earlier on my way back from Willowmore. A dead rabbit or hare lay in the road, and I slowed down to take a look. I couldn’t believe my eyes: there on the road was a rabbit with a brown tail and distinct black ‘moustache’. I was sure as I could be this was a Riverine Rabbit.

Now the quandry: I new that the specimen would be useful to science, but also could see from the look on my wife’s face ‘There is no way we are taking that with in our cooler box’. I put the rabbit on the side of the road, hoping it might still be there on the way back.

In the meantime, I took a photo and sent it to Campbell Fleming via Watsapp for confirmation: which nearly caused Zoe to drive off the road in excitement. Unfortunately, the response came to late to act on the reply to collect a specimen: two days later the bunny was gone.

I posted the photo on Facebook, the event of course creating quite a stir. I was contacted by EWT to come and investigate, and Bonnie and Kobus Theron (head of the Arid Zones program), together with a representative from CapeNature, came out to visit in March, setting up camera traps on the 2 hunting estates on either side of the road where the rabbit had been found. It was a great learning experience: I’d always been under the misconception that the rabbit was restricted to riverine habitats: but in fact they prefer the Renosterveld/Karoo interface, with shrubs rather than Acacia dominated drainage lines. The name is very misleading, except perhaps in the Great Karoo where the shrubby habitat is more associated with drainage lines.

Then in April, I was cycling to Uniondale, the opposite direction to where the bunny had been found, when what should I see lying in the road just 8km from the N9? Another dead Riverine Rabbit! This location was about 30km from the first site! Even though I was on my bicycle, I new that I had to collect this one, and tucked the carcass into my rucksack and cycled on. A week later Bonnie and Kobus were back to collect the cameras traps, and greatly excited by the bunny now sitting in my freezer. It had however been promised to Zoe for DNA analysis for her PhD, as Campbell happened to be visiting. Perhaps unsurprisingly at this stage, the EWT camera traps showed good occupancy of the area by Riverine Rabbit: so, it wasn’t some isolated find, but a genuine undiscovered populationof Riverine Rabbit, resulting in a massive range extension for the species. 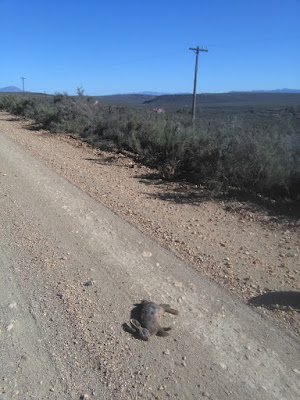 The story does not end there: on the last day of Campbell’s visit I was driving him to George to catch the bus. Unbelievably, as we were passing the exact spot where the 2nd bunny had been found on the way to Uniondale, what should be lying on the road? Another rabbit! Apparently, that makes me the lead discover also now of dead Riverine Rabbits.

Of course, many questions remain to be answered: is this population connected to the one at Sanbona? How many Riverine Rabbits are there really? Is the local population safe (seems like vehicular traffic is a bit of threat, and habitat conversion certainly is). 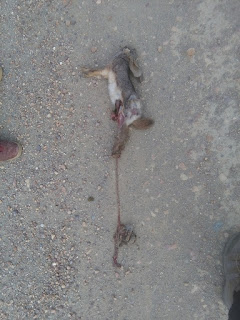 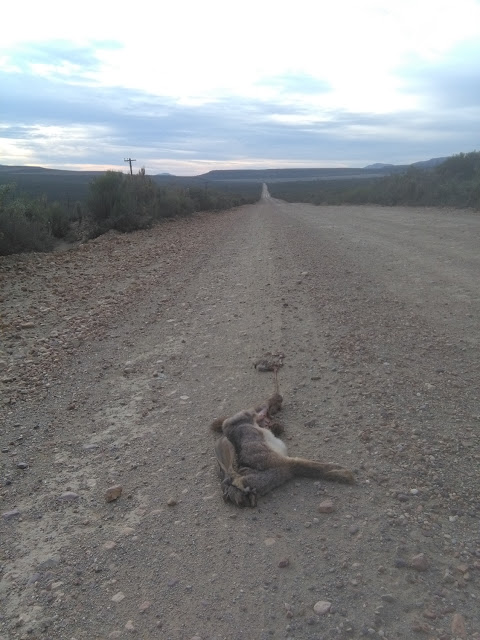