Sublimely Spectacular – the views of, from and within the Kammanassie mountains. Mannetjiesberg (the little man's mountain) is the beacon that greets us each time we drive the 40km from Blue Hill to Uniondale. The mountain has many moods and many personalities, but the pyramid form makes for a classic silhouette when viewed from the east. 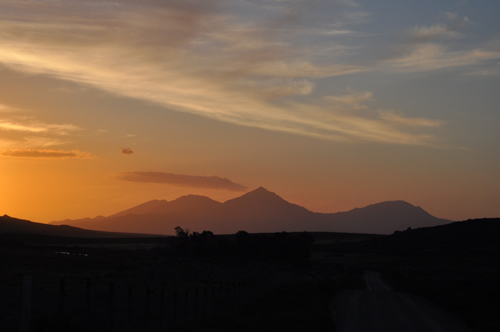 But it is also a mountain range little known and little explored by the general public. The heart of it is a provincial nature reserve managed by Cape Nature. When I first arrived in the area two years ago I would look at these mountains and wonder about hiking opportunities, but found nothing on the internet. The reserve had no website, no reception gate, no advertised picnic spots or campsites. Eventually I found the Cape Nature offices in Uniondale and left my details to be contacted about accessing the reserve. I heard nothing. The extra hurdle with accessing these mountains is that not only does one need Cape Nature permission, but the nature reserve is essentially private-land locked – one has to obtain permission to traverse farmland in order to access the reserve, creating a double buffer to public access. No offence to the farmers around here – but there is a general air of paranoia. I have been stopped by a gun wielding, aggressive boerevrou before while taking photographs, and while bird watching regularly have the back of my bakkie inspected by suspicious farmers making sure I am not stealing their livestock. And this is on public roads! As such, I wasn't exactly keen to go banging on farmers' doors asking if I could trapse through their land.
Earlier this year we found out about a public meeting with the rough title “Kammanassie:let it not be a secret anymore”. Apparently each nature reserve needs to have a community engagement program and this was part of Cape Nature showing they were doing that. I met the reserve manager, Philip Esau, and offered assistance with the bird monitoring program for the reserve. Specifically, the park rangers would make bird lists and submit them to the South African Bird Atlas Project but had not started using the software for automatic submission and so I offered to show them how this was done. Subsequent attempts to make a date to do the training fizzled out as the replies always allured to how busy they were. So the Kammanassie remained a secret to me.
Eventually through contacts with the Custodians of Rare and Endangered Wildflower (CREW) program, I met a member of the South African Mountain Club, who forwarded me contact details of David Jones, who was organising a 'meet' in the Kammanassie. I was given access details and the contact details for an amenable farmer (Willie Woudberg) and on Saturday for the first time set foot on this amazing mountain. Anja, who had a baby shower to attend in Uniondale, dropped me off at the foot of the mountain and I started my hike along the jeep track that meandered through Renosterveld under clear blue skies. The veld was alive with flowers and insects – which made hiking progress very slow with camera in one hand and binoculars in the other. 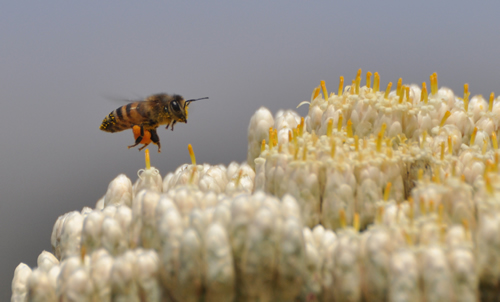 After 5 kilometres covered in 2 hours Dave, his wife Fay, and Oasis Oudtshoorn owners Derek and Jacomi caught up with me in Dave's 4x4. The next 5 kilometres were covered in less than twenty minutes, where we stopped at a ridge in order to hunt Hakea. One of the main missions of the hike was to clear alien vegetation, after clearing exercises from previous Mountain Club meets. However, a good job had been done and we found only a few errant Hakea. Young sprouting Pine trees were our next target.
Then on we continued, riding the cloud line along the Protea and Erica avenue with beautiful vistas of the Klein Karoo hundreds of meters below us. Views across the valleys revealed massive bends and curves in the layers of the sandstone rocks, testimony to the relentless tectonic forces that have folded rock like a child can fold paper, pushing ancient oceanic sediments towards the stars. Late in the afternoon we arrived at a shelter, nestled in a sheltered valley with a tinkling mountain stream for water. Over a kilometre up from our start, the weather was distinctly chilly even hidden away in the heart of the mountains. Mist and clouds danced amongst the crags around us, driven by the mad music of the mountain winds.
On Sunday I started my walk after the morning chill had abated to explore the route to the Perdevlakte (Horse plains) where in times past farmers would take their horses during outbreaks of Horse Fever, a disease transmitted by a midge that occurs after periods of heavy rain. The plain is a mini 'altiplano' – a surprisingly flat area given the general broken landscape of rocky ravines, cliffs and scree slopes that are most characteristic of the Kammanassie. But even here, at the frost line, flowers bloomed and provided food for sunbirds, sugarbirds and insects, in turn food for rockjumpers, perhaps in turn food for this beautiful animal – a Berg Adder.

Unfortunately, my time on the mountain was limited – I needed to return to Uniondale. But the magic of the mountains continued to unfurl around me. Hiking back down the lower slopes my eye lifted to the heavens where two avian angels soared – endemic, endangered Black Harriers surfed the mountain breeze.
This article is dedicated to the loving memory of Donald Christoper Rowe, who spent his twilight years in Uniondale, in the shadow of the Kammanassie.