Or how Birdwatching cost me R12000.00
I have now been away from home for two and a half weeks and counting. Sounds like a holiday? Well, it hasn't quite been that way. I last saw my wife and daughter on 15 November in Knysna where we spent the night together before I headed off for a field trip with CREW, and Anja stayed in Knysna for a few days away from home. I was hoping to head home after an extention of my CREW trip to Cape Town to offer a defence of my project proposal. However, on the way to Cape Town on 20 November the water filter on my car broke, leading to a catastrophic chain of vehicle malfunctions which have yet to be resolved now December 1.
I had been taking the back roads westwards after my time at Grootvadersbosch. Stopping here and there to watch birds and search the mountains for access routes. Suddenly, as I was drifting back towards the N2, the car cut out. As I pushed the car off the road, the smell of burning rubber seared my nostrils. Opening the bonnet the heat was palpable. Water I poured on boiled instantly. A passing vehicle paused to offer assistance, and pointed me to a nearby creek. I made the most of the opportunity to have some lunch and wait for the engine to cool.
Pushing on again over an hour later, it was clear this wasn't going to be something temporary. The heat gauge shot up and the car lost power. I stopped again to let the engine cool, before stuttering into Botrivier. The folk at the local filling station did not know of any mechanic. It was clear this was not going to be a good place to seek assistance. No buses stopped here either on the way to Cape Town. At this stage I thought I had found a solution, whereby over filling the coolant tank I thought perhaps by stopping regularly I might be able to continue slowly by taking the coastal road. By the time I was perhaps 10km from Kleinmond, it was clear my solution was not going to get me much further.
I phoned someone I had met earlier in the month who lived in Kleinmond, a friend of my cousin, whom I had met at my uncle's memorial service earlier in the month. Gavin offered to come tow me into town and offered me a place to sleep until the Monday morning, when the car could be towed into the garage. There the news was bad as was to be expected, with Friday and R5000 being optimistic outcomes for a solution, dependent on pressure tests and all sorts. Gavin gave me a lift to Cape Town for my meeting and I spent the time usefully at the university, given shelter by my mom's cousin. An enddate was pushed back to Monday, on which day I headed back to Kleinmond. The car was not ready. Neither on Tuesday. By Tuesday afternoon I given the analogy of a sick person in a hospital who could not be allowed to leave until better – otherwise the hospital would be accountable. Wednesday and there was talk of sensors needing testing and further work needed. It has not been ready on any subsequent day – despite much attention to the vehicle – I have passed by to observe 'progress'.
So here, I sit – looking for Groundhogs. Haven't seen any, but here are a few bird pics from along the way. 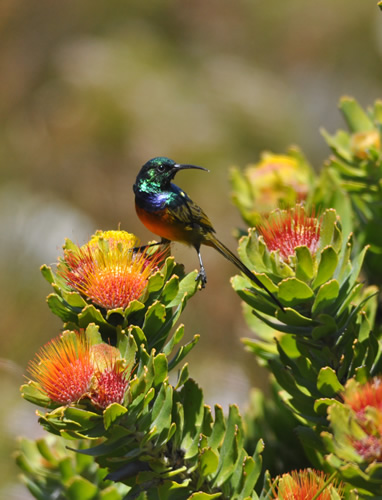 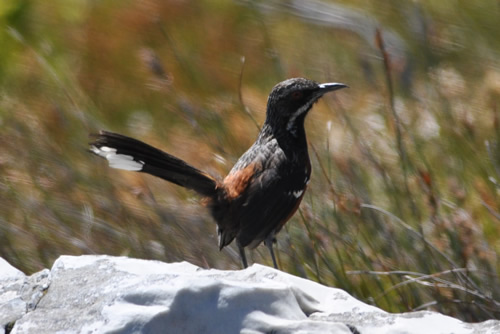