the beauties of Sleeping Beauty

16 March. What a day. I’d caught the early morning weather forecast on the 2-channel TV at the BnB and it did not look good: strong southwesters and a cold front, coupled with 60% chance of showers. I hurried to get ready and leave, to beat the wind, which always picks up a bit later in the morning. So the first 40km of the 70km ride to the Old Toll House (OuTol) on Garcia Pass was straight forward enough, but then the wind picked up quickly. It felt like there was far more south in that south-wester as my journey headed almost due south on the road to Riversdale. Eventually I was battling headwinds gusting over 20km/h. Finally I reached Fynbos, and was relieved that I had an excuse to start some survey points, to tackle the journey in one kilometre jumps. Despite the wind, but perhaps because of the passing rain, birdlife was fairly active.
I reached the OuTol just after midday in time for lunch. I was disappointed to see that I would need to continue to RIversdale, an extra 40km round trip in order to get a camp permit. Still, time and weather seemed to be on my side – at least it was not raining despite the dark clouds, and while I would have a headwind to Riversdale, the journey is mostly downhill, and so I would have a tail wind for the journey back. So I set off, to the accompanying racket of motorbikes of all shapes and sizes that had been passing me all day on some club outride to Mosselbay. Dark clouds billowed over the small town of Riversdal, and I hoped it was just a passing squall. No such luck. After asking around, I eventually found the municipal campsite that issues the access permit for the Tol House and access to the surrounding area – notably the path to the summit of Sleeping Beauty. The price is ridiculously cheap – R10 per person per night. Of course, there are no facilities apart from a pit toilet and there is no running water – unless you count the mountain spring that is the source of water.
It was while obtaining my permits that I made my worst decision of the day – I was offered keys to the Old Toll House – but since I did not fancy a second trip into RIversdal to return them (even though my onward journey would take me close to the town) I declined stating I would simply use my tent, as the rain at this stage still seemed light and passing. However, as I slogged back up into the Langeberge, it became heavier and heavier. On getting back to OuTol, having clocked up the most mileage for a single day in the survey so far – 111km, I had to pitch my tent in driving rain and everything was getting wet. At least it saved me a shower.
So here, I sit, surrounded by puddles, while rain sprays my tent and winds test the strength of the old Oak trees around me.
17 March. The rain subsided during the night, while the wind continued to howl up the pass. I was unsure what sort of day it would be. Turned out, it was cold, with the first count of the day scoring 10 degrees on the thermometer. The destination for the day was the top of Sleeping Beauty. The trail wound its way up through thick Fynbos, exploding with Orange-breasted Sunbirds and Cape Sugarbirds feeding on a mixture of protea species.
I had been here a few months earlier with Di Turner and the Outramps CREW group – and now it’s a different world – most of the profusion of flowers that had turned out to enjoy the spring had by now set to seed or faded into obscurity. The bright yellow hue of the Leucadendrons (conebushes) had subsided into an innocuous green. Towards of the top of Sleeping Beauty (1338m) a variety of Erica species still bloomed and augmented the clear views across the dappled landscapes in all directions. In case you were thinking of taking your Bible up the top of the mountain, don’t bother – there is already one up there in a waterproof box, along with ten stones bearing the ten commandments (perhaps just a reminder in case you wanted to commit adultery or murder anyone while you were up there).
By the time I was back down, it was getting on in the day – I had been suitably distracted by curious Orange-breasted Sunbirds which came to greet me, and frustrated by shy Cape Sugarbirds. After a late lunch or early dinner I headed back onto the road for a few more counts. Just as I had completed the first one, a Honey Badger crossed the road not far from me. That was a treat – something a bit different from the Klipspringers and Dassies, the usual mountain denizens.  But soon my legs could not take anymore, and my body was begging for some rest. 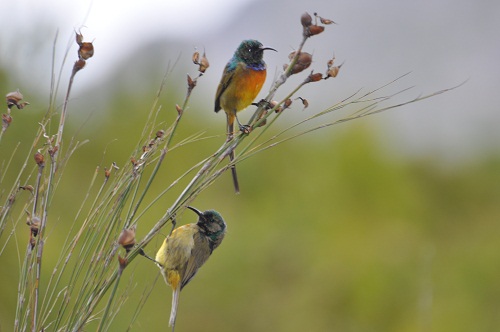 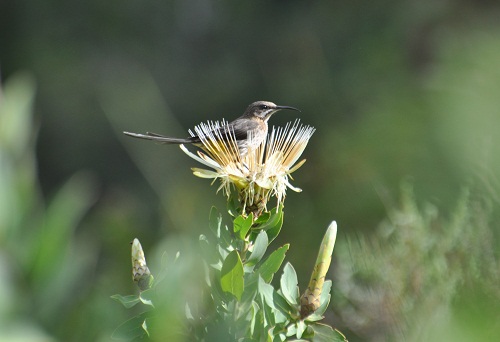 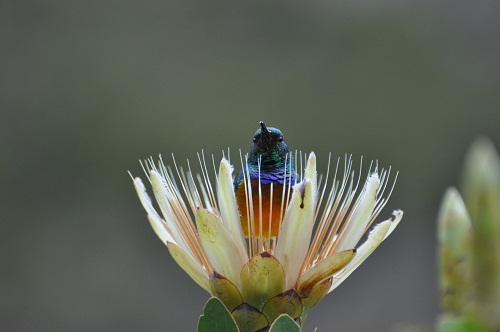 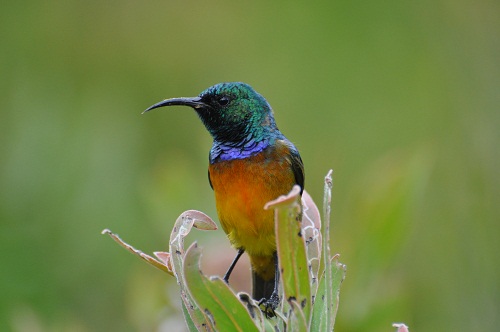 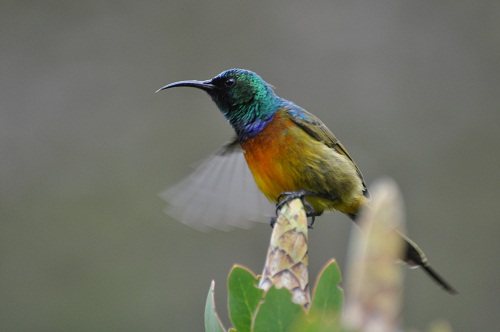 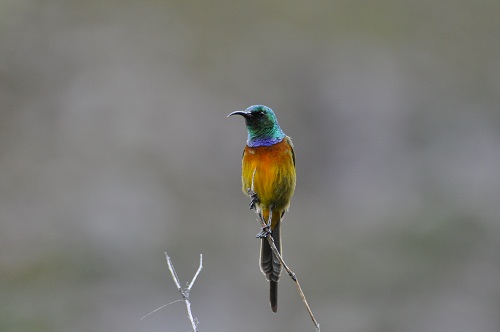 18 March. An almost inconspicuous breeze brought the morning’s temperature to 6 degrees above freezing, so fingers were thankful to be wrapped around a warm up of Nescafe coffee, even if my tastebuds were a bit disappointed in my early morning brew. The early morning took me up a short section of Kristalkloof, so named for the crystal clear water of the valley’s stream. Most other streams in the area are reddish in colour telling of their origins in the peat layers in the hills. For the first time since the Kammanassie Striped Flufftails responded to the calls I played to the hills.
I made Riversdale for lunch. Here I had to choose between the longer but easier riding of the N2, or the back routes via the Korente Dam, to my next destination – Wildcliff Nature Reserve. The distant jackhammer noise of Harley-Davidson’s persuaded me the back route would be the more peaceful option. While pushing my bike up yet another steep hill, I wondered if I’d made the right choice, but I did have the gravel roads all to myself and the occasional confused Cape Francolin. So I pushed on in the shadows of the Sleeping Beauty, which no kiss of mine could awake.