My refuge for the 18th and 19th of March was Wildcliff Private Nature Reserve. Jeannine McManus, who manages the establishment, kindly lent me use of all facilities – including a much needed refreshing of my clothes and towel in a real washing machine. Since George the best I’d been able to do to clean my clothes was rinse the sweat out in the shower.
My survey day took me through a Fynbos Forest – with Proteas and Leucadendrons growing over 5 meters high, a clear indication I’ve reached the higher rainfall regions of the Western Cape. Several counts were conducted in alleyways of thick vegetation, with Sugarbirds and Sunbirds flying above me. The survey line took me over the little used Gysmanshoek Pass, and into drier north facing slopes with low vegetation, which are generally bird scarce compared to the southern slopes.
The afternoon I was able to make use of a good internet connection to reconnect with friends across the globe – I have to admit I am a fan of Facebook. And while most days I talk to Anja, it never seems to be for quite long enough – trying to stay updated with all the mischief daughter gets up to and the general sagas that involve day to day life on the remote reserve. As such a nice long telephone chat was very welcome.
The next morning I conducted two points on my way to my next stop – Grootvadersbosch and Boosmansbos Nature Reserve. While only 35 km away, one road on the map is marked on the Slingsby Map of the Garden Route as Very Steep. And it was a bit of an endless grind in some hot weather over the seemingly innocent and gentle foothills of the Langeberg. Generally, these now have very little Fynbos, either burnt or ploughed up to create grazing conditions for cattle – which are plentiful.
The highlight of the cycle, besides my peppermint chocolate bar, was a flock of around 26 White Storks which were actively following a tractor with a shallow plough. I’ve never seen this behaviour by storks before – but I have not spent that much time in the Overberg, which has now become a stronghold for this species that of course spends our winters in Europe. The scene did remind me of flocks of seagulls which regularly follow tractors in the rural parts of Great Britain. 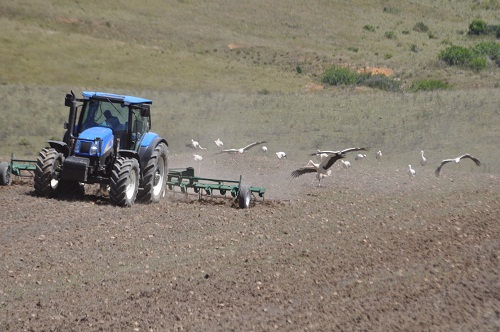 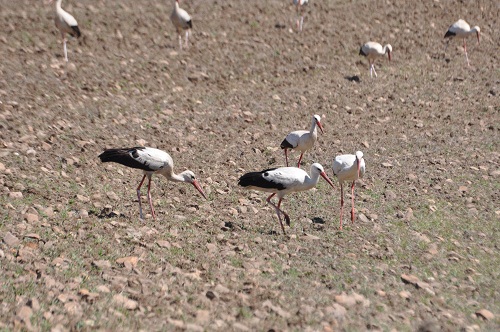 I arrived at GVB early enough to set up camp, rest, and then conduct an afternoon survey of the foothills in the shadow of Boosmansbos. Victorin’s Warbler are unaccountably abundant here, while flowering Erica versicolor explained several close encounters with Southern Double Collared Sunbirds.
During the evening, temperatures dropped. I had set my alarm for 6am in order to pack camp and start the big hike into the Wilderness Area. However, heavy mist rolled around the campsite and it did not look like a good day for tackling a big hike. The circular route is 27km long. So I snuggled up back into my sleeping bag and waited for conditions to clear, which they did around midday. Since it takes around 7 hours for the 14km hike to the Helderfontein overnight hut, I knew I was cutting it fine time-wise and set a fast pace, interrupted only on a few occasions to record birds.
White-eyes and Southern Double Collared Sunbirds gave way to Orange-breasted Sunbirds and the occasional flock of Yellow Bishops foraging on Restio seeds. White-necked Ravens and Red-winged Starlings called from distant cliffs as I navigated the old jeep track ever upwards. The sight of the hut was very welcome when finally I did crest the first of the mountain ridges. Having camped here previously (see post on Old Man’s Bush and Grumpy Man’s Forest), I knew roughly what to expect. However, now the slopes were covered with prolifically flowering Protea aurea or punctata, and the nectarivores were feasting.
Conditions in the hut had not improved, and I delicately cleared a space between rat droppings and cockroaches for my sleeping mat and camp stove. Then, as per most nights, exhaustion overtook me and I was soon fast asleep. Eventually the scampering of the nocturnal inhabitants of the hut awoke me, and a return to dream worlds slipped ever further from my active imagination.
‘Surely it must be 5am?’ I thought to myself as I fumbled amongst my possessions for my phone aka watch and alarm clock. Nope. 2am.
I decided to have a slow Milo and breakfast. Then, quite awake, I packed up and by the light of my headlamp decided to move on. The early start meant I could make an attempt on the highest peak in this section of the Langeberg – Hoogberg (High Mountain) at 1638m.
I dawdled in the dark past the pink platters of sweet nectar on offer from the Proteas. This is quite drinkable in flowers that have just opened and where the Sugarbirds have not gotten there first. Two and a half hours later I was on top of the mountain, enjoying one of those views that used to be the preserve of the mountaineers of old, but are which are now accessible to anyone on an overnight flight – the dawn breaking above the clouds. I endured biting winds for an hour, while clouds moved in an endless tide around my mountain island, like silent waves crashing across candy floss shores.

Then back to work – with Ground Woodpeckers and distant Rockjumpers responding to my early morning wake up call, before I left the rocky high ground and plummeted back into clouds and rejoined the Proteas, where at one stage over ten curious male Orange-breasted Sunbirds fluttered around my head like glittering fairies in the underworld.
It’s amazing how fast time flies when trying to spot Rockjumpers among the rocks, or distinguish a dead Protea flower head from something that might be feathered. I had promised to give a talk to the rangers at the office in the afternoon, and by the time 8km stood on my GPS, it was 11:30 and I still had a way to go as the side trip up the mountain would easily have added 5km to the total journey. So it was 2 hours of hard and solid hiking to get back down to the office by 2pm – where I discovered, to my secret delight, that everyone had gone for a two day training course. I collapsed into my tent – exhausted again.