“Eastern Cape: Adventure province" boasts the Eastern Cape Parks and Tourism Agency. And what an apt description for the Baviaanskloof Atlasing Weekend that took place from the 14th – 16th September. We're not talking about Disneyland style adventure either; this was Expedition Birding, with the focus not on a high pentad score but rather on pints of adrenaline exuded.

The adventure for Pat Nurse (chair of the Lakes Bird Club) and me started on Friday morning as we set off from Blue Hill Escape with a chill breeze at our backs and grey skies overhead. Heading to the rows of virgin pentads to the north of the Baviaans Mountains bordering succulent Karoo seemed like the option that would keep us driest, but it was touch and go as to whether the rain would abate sufficiently to allow the birds out of their hidey holes. We decided to stick together for the first pentad in order to get to grips with the local bird community; and the variety and activity was such that we drifted well into 3 hours before realising we needed to move on. Highlights included the suite of four Bunting species, as well as Karoo and Southern Black Korhaan. Dusky Sunbirds were collecting nest material, and Titbabblers were fiercely defending territories.

Pat and I split up to tackle a pentad each on what is known locally as the Baviaanskloof T2 route, which skirts the northern edge of the Baviaans Mountains mostly through a Spekboom Thicket mosaic. The route does have many gates, but that didn’t slow the birding down, and our lists easily topped 40 in the two hours we allowed ourselves there. But it was a long way to go to the rendezvous point with the rest of the team in the heart of the reserve as we had to back track on the road to Willowmore. Speeding along the otherwise good Winterhoek road, an unexpected gulley launched Pat’s Fortuner clear into the air. Despite temporarily joining her feathered targets for bird’s eye view of the pentad, this manoeuvre did not result in any addition to the checklist.

Our pace slowed only for a pair of Booted Eagles after the red cliffs of Nuwekloof pass, and to ford drifts. While these were initially shallow, they became deeper and deeper as we headed further east down the Baviaans River through the kloof. The river is still flowing high after a record wet winter for the Eastern Cape. After a while I was almost worried water would come through the open window of my little Jimney, never mind the door. However, we arrived at Juweeltjie camp with our feet dry, but with callouses developing on our hands from gripping the steering wheel so tight.

But where was everyone else? Only the Le Roux team from Limpopo had arrived. While we were setting up camp Lindi Elloff (who had coordinated most of the reserve logistics) arrived with Eran Dvin (some might recognise the name of the vet from Pretoria from other atlasing weekends). They brought the news that the Smitskraal river crossing was running too deep and fast for Ian Field (from East London), and Lynne and Sandra (from PE). Indeed, it is a good thing there are new ecological toilets at Smitskraal because anyone who views the seemingly endless stretch of fast flowing water that supposedly is the road generally has to grab the toilet paper and run for them.

Brian Reeves, the reserve ecologist, had decided to camp with them at Rooihoek campsite and they would all drive through together to the Grasnek Pass the following day. At Juweeltjie we divided ourselves into three groups to target what we could, given that the Baviaanskloof Trail Run was taking place on the route that we would normally have used to access the unatlased pentads away from the R332. That night was very cold and several jumpers were necessary to keep the chills at bay.

On Saturday, the Le Roux party set off with Lindi to atlas a virgin pentad south of Smitskraal, Pat set off with two reserve rangers to thoroughly cover the ‘home’ pentad centred on Juweeltjie and Geelhoutbos, and Eran and I set off to meet Brian with his entourage on the Grasnek Pass. This location offers amazing views east towards the upper reaches of the Kouga Dam, which we were able to admire while Brian dried out the air-filter of his Isuzu – which had ingested water during the crossing of Smitskraal.

Then it was off in convoy to the plateau of the ancient African landsurface. Thanks to Eran’s chatting I hardly realised that we were ascending a near vertical rocky 4x4 trail – although it did require all my concentration for the final summit. At the top, previously silent sceptics of the little Suzuki Jimney had been converted into fans – with Eran now more convinced than ever to get one. Birding in five-year old Kouga Fynbos is not the most exciting. By the end, everyone could confidently tell Grey-backed Cisticolas and Cape Grassbirds by call. The highlight was a distant (thankfully) herd of buffalo numbering around 50 individuals. On the descent, a pipit transformed from African, to Long-billed, to Rock before our very eyes. A playback experiment in the end scored it as a Rock. If the ascent to the plateau had been challenging, the over-grown route we chose to descend was something else. Luckily I had Eran to roll oversized boulders out of the way, and the Jimney was in its element sliding around hairpin bends on the final stretch. By the end of it all, we had taken all day to atlas just one pentad, for a grand total of about 20 species.

In the meantime, Pat had hit the jackpot in the home pentad – with a combined list of close to 80 species, including thicket species such as Yellow-breasted Apalis and forest species such as Knysna Turaco and all three Honeyguides. The rangers in her company had kept her safe from buffalo and that large species known for its valuable horn, which was not seen, but was evident from fresh scat and scrape marks at middens.

All teams reported Verreaux’s Eagle and Magriet from the Le Roux team had a sighting of a Black Stork flying overhead. Old reports of the descriptions of bird life in the Baviaans mention this species as occurring in the highlands, so it was nice to know at least one is left.

Although the day had cleared up nicely, it was still nice to get together around the roaring fire in the evening to share stories, while Frans Le Roux took care of everyone’s braai needs.

Sunday morning Pat started east to target yellow pentads beyond Smitskraal to Komdomo camp, locating a Verreaux’s Eagle nest on route. Brian, back at Rooihoek, realised that the previous day’s adventures had been a bit heavy on the diesel. Lynne and Sandra volunteered to lighten the load and stick to the Rooihoek pentad, while Ian started birding his way back to East London. While the Le Roux’s had been thinking of joining us on the second adventure south beyond Geelhoutbos to more virgin pentads, they were distracted by good birding around Geelhoutbos, including nice views of Klaas’s Cuckoo and Collared Sunbirds foraging among the pink Pelargoniums. Brian, Melissa, Eran and I pushed on to the northern boundary of pentad 3340_2410, where we set out further on foot in order save diesel. A highlight for me was a distant encounter with Cape Rockjumper, while Eran unsuccessfully thrashed the undergrowth for a glimpse of a sneaky Victorin’s Warbler. Brian and Melissa meanwhile spent much time documenting the many flowering Fynbos plants.

On Monday the Le Roux team headed to virgin pentads in the Grootrivier mountains beyond Willowmore as part of their long trek back north, while I headed back to my Fynbos survey around Bergplaas, adding Rufous-breasted Sparrowhawk to the weekend list, and Red-winged Francolin to the list on a survey north of Patensie.

While the weekend may have been low on total pentads covered, they do perhaps set the trend for the adventures that will unfold as we head ever deeper into unexplored and inaccessible territory across the country on the quest for 100% coverage for South Africa. There are still several virgin pentads in the Baviaans, and it makes for a good reason to repeat the exercise next year. Hopefully we’ll see you there! 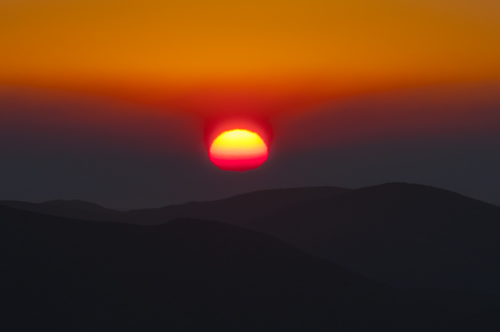