In search of Sugarbirds on the Prince Alfred's Pass

As part of the Fynbos Endemic Bird survey this past week we have been on the Prince Alfred's pass between Knysna and Uniondale, to ring birds along an altitudinal gradient (from high in the mountains to sea level, eventually). We've spent 4 of 5 eventful days, starting at the top of the pass in a stand of Leucospermum cuneiforme (pincushion), and then headed down to De Vlugt. Here we spent a night camping on the recently declared Pienaarsrivier contract nature reserve, owned by South African conservation legend Katot Meyer. He has done a remarkable job control alien vegetation and fixing up the place to make it really interesting and informative. The reserve is also the start of the famous Burchell's 4x4 trail, that follows part of the route undertaken by biologist William Burchell in his wagon trip around South Africa, for whom the Burchell's Zebra and Burchell's Coucal are named. The 4x4 trail proved fairly adventurous, especially since we undertook to do it in the dark using only our small Suzuki Jimney. We got through, but not without some scars to remind us of the rough conditions that are involved in getting over these mountains, as at one point we slid into a Waboom (Protea nitida), leaving a dent in the door.

With weather a bit wet and damp, for the last 2 days we took the gracious offer of accommodation from the Outeniqua Trout Lodge, where Naomi and Ingo treated us superbly. Today, after a quick stock up in Uniondale, we head back to the top of the pass to catch Cape Sugarbirds in a patch of Protea eximia.

For anyone travelling the Prince Alfred's pass, I'd be grateful for any information on any ringed birds sighted – especially location and color of the ring.

Here are some highlights from Pienaarsrivier: 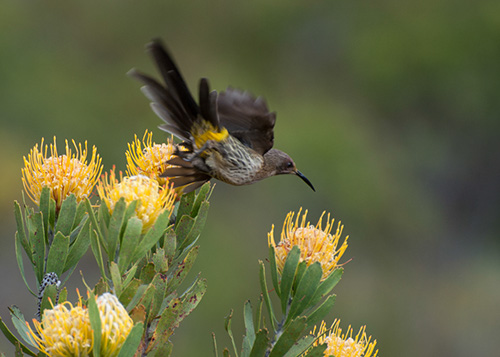