I heard my first Striped Flufftail while camping in the Langeberg Mountains while on a CREW expedition. I didn’t know what it was at the time – I was hoping it was a Hottentot Buttonquail, but I recorded the call and Peter Ryan at the Percy FItzPatrick institute identified it for me. That was in October 2011 at the Helderfontein hut.

This year I’ve listened to the call of the Striped Flufftail maybe 800 times in various parts of the Fynbos. There are two distinct calls, the first a melodic, almost soothing, “hoot-hoot-hoot”; which is a contrast to the second call - a staccato “k-k-k-k-k whoop whoop whoop” rattle call. Sometimes, I’ve been answered with the rattle call as part of the territorial response of a resident skulking bird, but most of the time the playback has been met with silence, or just the sound of the wind through the Protea covered hill sides. On some occasions I’ve been wondering along a mountain trail and heard the hooting in what seems to be the far distance. But the calls are not that loud, and if you can hear one, it’s probably closer than you think. But during all that time I failed to catch a glimpse of an individual bird.

On one occasion on the Montagu Pass an answering call erupted from close behind me in low Erica dominated Fynbos that didn’t reach above the knee. The bird could not have been more than 15 metres away, but a dedicated search failed to reveal even the rustle of the bird through the undergrowth. But they don’t always answer, even if they are around – on returning to the Helderfontein hut, where I planned to get my first actual sighting of the bird, the playback elicited no response. Perhaps it was a time of year thing – it was a hot day at the start of spring.

Last week I reported an excellent week of ringing from the Kammanassie Mountains. What I did not report was that each evening and almost right through the night, the hooting call of a Striped Flufftail echoed down from the mountain slopes above our very basic campsite. We had chosen this spot to camp because of a very primitive shack, too small to sleep in, but big enough to provide shelter from the wind while cooking on our gas stove. But more luxuriously, there were two baths that served as drinking troughs for cattle. They also provided a very refreshing escape from the summer sun induced sweat. These baths were constantly fed by mountain water fed in by a black pipe that could not be turned off. The overflow from the baths had thus created an artificial permanent wetland on the slope below.

One afternoon this week while navigating the Ortholobium shrublets on the 50m or so section of slope from the baths to the hut, I heard the Flufftail hooting coming from my left. I realised the Flufftail was closer than I had presumed. Getting back to the camp, I set up my recorder with the call on the other side of an open track and put the call onto repeat playback. I then chose a spot in the bushes and proceeded to wait. After five minutes I heard the Flufftail rattle call a few meters away from me. I lifted my camera and made sure the dodgy focus was working. After another eternally long five minutes, eyes watering with attempts to focus on the spot between the call and the speaker, I lowered my gaze to peer into the bushes. Nothing. But on scanning back to the track a dark bump had appeared in the grass that had not been there a minute before. Sure enough! It was the Striped Flufftail! Unfortunately a branch obscured my view for a clean photo, and on leaning to the side to get a clearer view the bird spotted me, hunkered down, and within three seconds had fluttered back into the safety of the swamp, where any further views would be impossible.

I held my breath as I switched the camera to review mode – and felt triumphant as I reviewed the evidence of my encounter, not as sharp as I would wish, but clear enough all the same.
So, a lifer, and a day to remember. 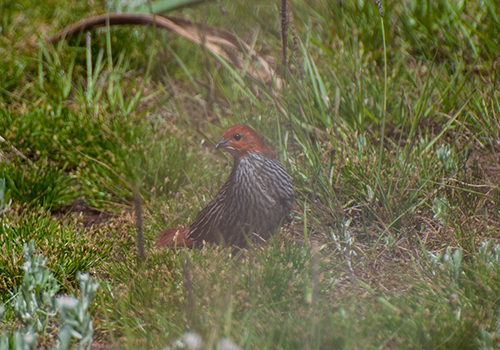 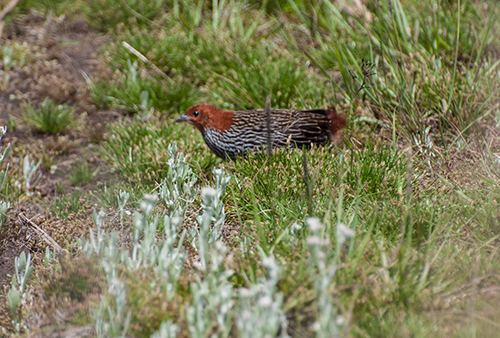 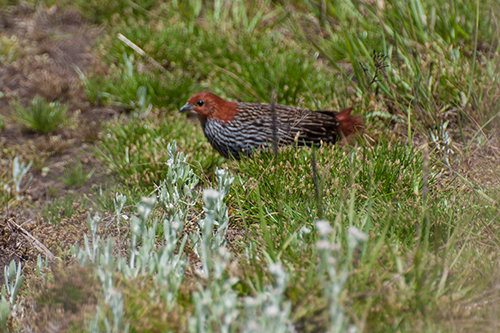