New species of Buffalo found in the Baviaanskloof!

The Ivory-horned Buffalo has just been described from the Baviaanskloof Nature Reserve. Very similar to the Cape Buffalo, the Ivory-horned Buffalo sports horns very similar in composition to the tusks of African Elephants. The discovery of the species was confirmed recently by a ground expedition, which ventured into the hidden valleys of the wilderness area to ground truth reports of unusual color patterns observed during a recent aerial census of the reserve.

Much of the terrain of the Baviaanskloof is very mountainous, with high grass covered hills separated by untraversable canyons. It was probably this isolation that led to the evolution of this distinctive form of Buffalo. The herd that was encountered appeared fairly docile, probably never having encountered humans before. Good news for conservationists is that they are breeding, and so alive and well.

Only one road traverses the heart of the 200 000 ha Baviaanskloof Nature Reserve, and much of it remains unexplored – especially the deep valleys that lie beyond the high mountains.

The following are exclusive images of the Ivory-horned Buffalo captured by our intrepid expedition photographer: 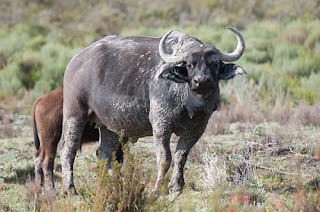 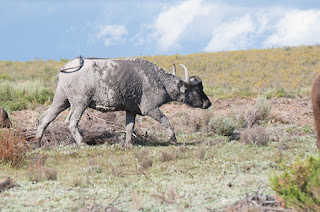 These photos are of course of Cape Buffalo covered in mud. Happy April Fool's Day!