A million birds killed on South Africa's roads every year?


Two weeks ago while driving from Graaf Reinett to Beaufort West along one of South Africa's most featureless roads traversing the Great Karoo, I was awakened from my daze by the flash of a dark black and white tail floundering in a bush 50 meters from the road. It had to be a Black Harrier. I turned the car around.

Unfortunately, it wasn't a bird dealing with a prey item as I had hoped, it was an injured bird with a shattered wing. Despite that, it looked healthy. Looking into those brilliant yellow eyes, there was only one thing for it – try the best we could to help. To cut a very long story short on how we tried to track down someone to get help, involving a string of phonecalls and the acquisition of unneeded knowledge of the back roads of Beaufort West, we eventually got the bird to a vet.

Unfortunately, despite the best care and attention, it didn't survive the night. It was a cruel reminder of the carnage wrought upon our birds on roads across the planet every day. RIP Black Harrier. 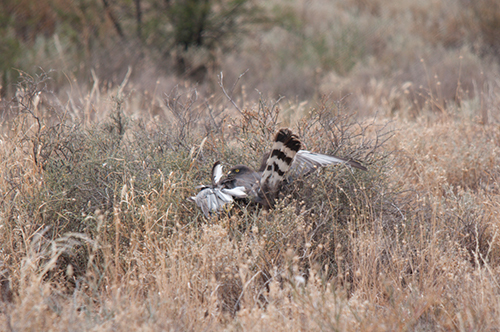 The following is the original text for an article I wrote that appeared in the last edition of Africa Birds and Birding in 2012. Since this information disappears into obscurity, I'm putting it online, to try remind us to take care when we drive, if we need to drive at all.

If you speed, you’re a killer

Drivers along the N2 will have seen this fairly dramatic sign. Obviously designed to scare drivers into obeying the speed limit by making them think about knocking down old grannies and young children, there is in fact more truth to that statement than the average driver would care to admit.

Birds killed by collision with motor-vehicles are the most obvious impact of roads on birds. Birds are listed as killed more frequently than most other animals in road mortality studies. One estimate of bird mortalities from all causes lists vehicle deaths as the fourth highest at 80 million or more per year in the United States. The top three reasons for bird mortalities were collisions with buildings, high tension lines and cats, with bird fatalities due to wind turbines almost negligible at about 28 000 (<0.01%) - although these may be species of greater conservation concern. More insidiously, roads also cause fragmentation, habitat isolation, noise and light disturbance. Reduced breeding success has been correlated to road proximity or road density for species ranging from warblers to vultures.

I imagine it would be few readers who are also drivers that have not hit something during some journey across the country. So my question during a recent 3000km bicycle ride across the Western Cape was how many birds are killed a day, and under what conditions.

My journey took me along 2000 kilometres of gravel roads of various kinds, and along just under 1000 kilometres of paved road. While cycling, I recorded any fresh bird road-kill (I wouldn’t have gotten anywhere had I recorded all the Scrub Hares splattered across the road too). By fresh I quantified anything that I judged had been killed in the last 24 hours - after all, I was trying to figure out how many birds were killed a day – and recording each pancaked smudge of feathers would not have helped me answer this.
During my journey of three months I encountered 19 birds of 17 species that I thought had been killed on the day, or during the previous night. The species recorded most often was Cape Weaver, with 3 encounters. Most fatalities (16 of the 19) were recorded on tar roads – and two of the birds I encountered on unpaved roads may have been the victims of catapults, as they were located close together near a farm settlement. Studies indicate that roads with low to moderate trafﬁc volume but high speeds incur a higher rate of vertebrate road-kills.

So how many birds a day is that? The CIA lists that South Africa has 73 506 km paved and 288 593 km unpaved roads. My encounter rate of freshly killed birds for these roads was 0.02 and 0.005 birds per kilometre respectively. This equates to 1176 and 144 birds killed per day on paved and unpaved roads, which is about 400 000 birds per year. I believe this is an underestimate for the following reasons: Firstly, all but one of the birds I recorded I picked up from the left hand side of the road – I was more inclined to pay attention to the side of the road I was cycling on to avoid broken glass and other road hazards. Based on this alone a more reasonable estimated figure for bird fatalities is closer to 1 million. Secondly, on busy roads I probably missed birds that were knocked into the road and then flattened by trucks of passing vehicle volume. Thirdly, a proportion of recently killed birds will have been carried off by scavengers. Forth, but mostly importantly, a bird hit by a vehicle travelling at 120km/h or more has a good chance of being batted far from the road into the grassy verge meaning that the numbers I encountered were only a fraction of what are likely killed by vehicle impact each day.

Some groups of birds are more at risk from road mortality than others – nocturnal birds, walking birds, water birds, ground nesters, scavengers, fruit-eating birds, winter ground seed eaters and migrants that make land fall after traversing long distances over open water. From the birds that I could inspect, several were juveniles.  Of the adults several showed primary or tail feather moult, slowing them down just enough for them to misjudge a flight across a road in traffic. On the brighter side, no endemics were found among the casualties.

Despite claims to the contrary, the condition of roads in the Western Cape is very good. Road works are encountered all over, from graders on gravel roads, to major gravel road upgrading, to work on the R62 and N2. While these are good things – improving our infrastructure while creating employment, they are not so good for wildlife when speed limits are not obeyed, and while different birds would have different evasive capabilities 120km/h is probably beyond the evasive capabilities of most birds.

Someone I know once conducted an inadvertent experiment on a Northern Cape road when following a truck that had spilled grain for kilometres, in turn attracting hundreds of seed eating species. At 120km/h he noticed he was hitting many of these birds. He slowed to 80, a speed at which no impacts occurred, and then gradually increased his speed. At 105km/h he started to hit birds again, suggesting that 100km/h was a reasonable speed to travel whereby distance could be achieved and bird mortality minimized.

Next time you are travelling to chase a lifer or mega rarity, keep your speed down: it improves your carbon footprint and it’s better for the wildlife. 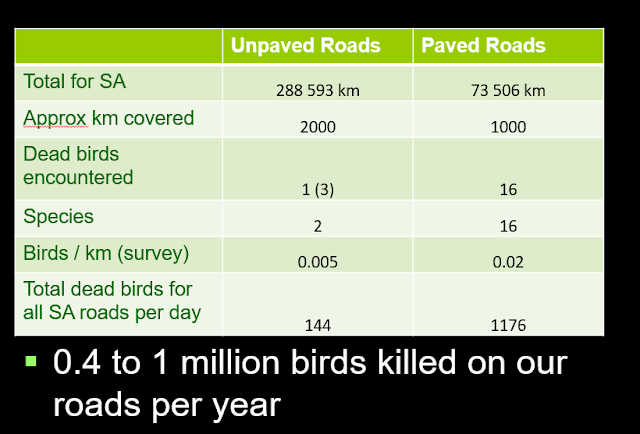