Cape Sugarbird: the Phoenix of the Fynbos

The following was a contribution to the African Birdlife magazine Nov/Dec 2013 issue, the official publication of Birdlife South Africa: 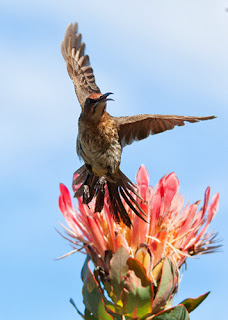 The Cape Sugarbird (Promerops cafer) is one of the most characteristic birds of the Fynbos – a male often evident perched upon a tall protea bush, tail streaming in the breeze; and occasionally bursting into the air with a staccato call while whipping his tail back and forth in a dramatic display flight. A glance at the second Southern African Bird Atlas Project (SABAP2) map shows a continuous range which accurately paints the map of that landscape dominated by proteas, ericas and restios that we call the Fynbos. Cape Sugarbirds are frequent visitors to gardens on the urban fringe, where they feed on a variety of exotic nectar-producing plants, suggesting they are fairly adaptable to a changing landscape.

When I set out on my bicycle to survey as much of the Fynbos as I could during 2012, the Cape Sugarbird was one endemic bird that I was least worried about. However, by the end of the marathon survey, I wasn't so sure. These nectar-loving birds show a clear linear increase in abundance with the age of the Fynbos, being practically absent from recently burnt areas and found in their highest densities in mature, protea dominated habitats -  most likely because of the larger numbers of flowers that are produced by older bushes. But – of the 715 counts I conducted where I could confidently estimate the time since the last fire, 76% of these had burnt within the last 15 years. While Cape Sugarbirds are found in acceptable numbers (a pair or more per hectare) in habitat ranging from 5 – 15 years, those habitats where they are most abundant (i.e. >15 years) are a minor component of the landscape. Recently published work by several researchers shows that time between fires is decreasing – partly human linked, but mostly due to climate changes that are resulting in warmer, drier weather with more lightning events. 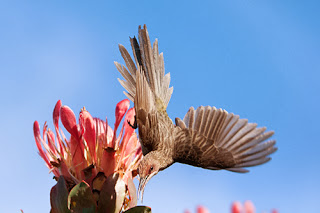 Furthermore, fires are occurring over larger areas and this is of concern because Cape Sugarbirds need to move from one patch of flowering proteas to the next during the year, as most protea species have short peaks of flowering over just a few months. This creates bottlenecks in food availability, and should populations of the few species that flower in summer burn simultaneously, this will leave us with many hungry Cape Sugarbirds. And don't think they can just move to an unburnt site as the SAFRING database suggests that Cape Sugarbirds do not disperse very far – 98% of recaptures of Cape Sugarbirds have been within 10km of their site of initial capture (for comparison, this value for Western Cape's Malachite Sunbirds is 78%). In addition, this is the only one of the four common nectarivores of the Western Cape that shows a decline in numbers per ringing session over the last 30 years (but local ringer behaviour may also account for this). If that is not enough, Cape Sugarbirds have been reported from 15% fewer Quarter Degree Grid Cells between SABAP1 and SABAP2. However, it is robust, breeds quickly and is unlikely to go extinct this century.

Much like the Phoenix, the fate of the Cape Sugarbird is tied to fire – it just takes a lot longer to be reborn. 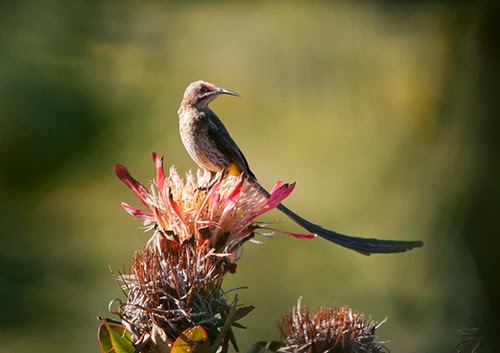 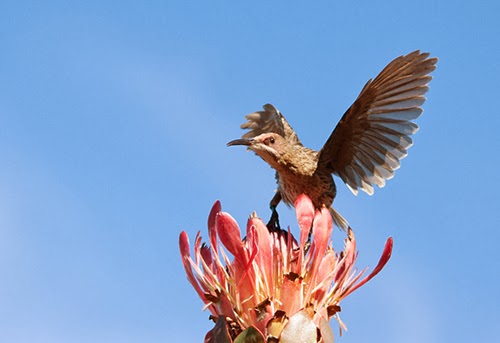 Thanks to contributions from DaleWright and Phoebe Barnard