Flufftails are pretty but secretive birds associated with wetland areas, a bit like crakes. The White-winged Flufftail Sarothrura ayresi is the latest addition to the growing number of the world’s birds which are threatened with extinction. The tiny and secretive flufftail, one of nine flufftail species in Africa, is now listed as Critically Endangered, one thought to be one step away from disappearing off the planet. The White-winged Flufftail is only known to occur in South Africa and, nearly 4000 km away, in Ethiopia.

Fewer than 250 adult White-winged Flufftails remain in the wild and the South African population is estimated to number less than 50 birds. These estimates, combined with the emergent threats of habitat degradation and habitat loss, saw BirdLife South Africa and the Ethiopian Wildlife and Natural History Society, two BirdLife International partners at the opposite ends of the continent, motivate for the uplisting of the White-winged Flufftail to globally Critically Endangered. This category represents the highest risk of extinction in the wild. White-winged Flufftail is the second South African bird species to be listed as globally Critically Endangered, with the other being the Tristan Albatross.

According to BirdLife International: “destruction and degradation of its high altitude wet grassland habitat, including wetland drainage, conversion for agriculture, water abstraction, overgrazing by livestock and cutting of marsh vegetation, have driven it to this precarious state. Urgent action is now needed in both Ethiopia and South Africa to better understand the species’ ecology and to address these threats and save it from extinction”. The preferred high altitude wetland habitat in South Africa, which is mostly limited to  Mpumalanga, Free State and KwaZulu-Natal, is threatened by mining, pollution from industrial effluents, domestic and commercial sewage, acid mine drainage, agricultural runoff and litter. The three Ethiopian wetlands where the birds are known to occur and breed are threatened by overgrazing and grass-cutting. A survey of suitable wetland habitat in South Africa is currently underway and will contribute to a better understanding of the extent of its occurrence in South Africa. The analyses of blood and feather samples will shed light on whether the birds move between Ethiopia and South Africa or whether the two populations are in fact isolated.

• The White-winged Flufftail is BirdLife South Africa’s 2013 Bird of the Year.
• The aim of a recent trip to Ethiopia, undertaken by BirdLife South Africa and the Middelpunt Wetland Trust, was to obtain blood and feather samples for genetic and isotope analyses. Seven flufftails were caught and released back in the wetlands near Addis Ababa. The only South African samples to be used in the analyses are from two museum specimens. The full story is documented in the latest issue of African Birdlife magazine: 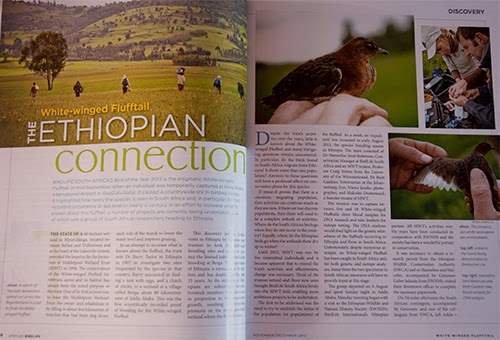 • In South Africa the White-winged Flufftail has been recorded from no more than 15 wetland sites, and the species is probably only occasionally recorded at these sites. There are no SABAP2 records, this map shows SABAP distribution (from http://sabap2.adu.org.za/spp_summary.php?Spp=204&section=3) 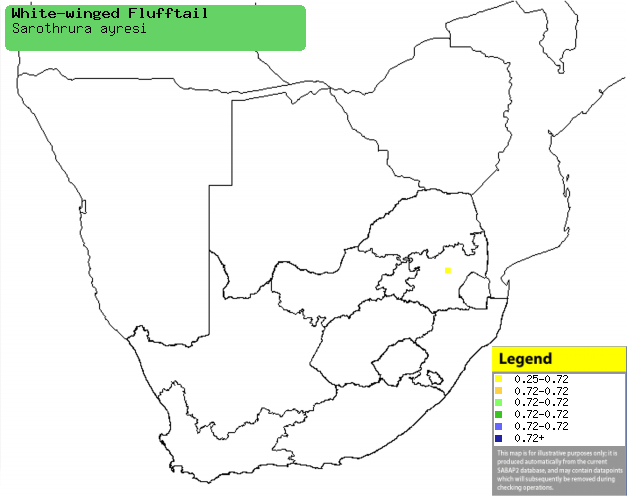 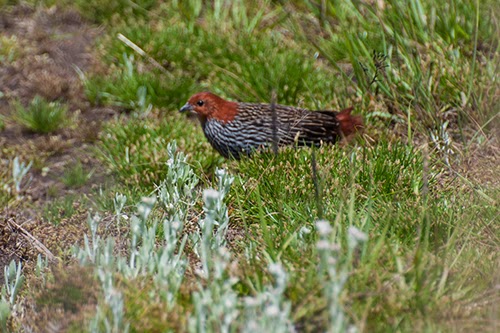