The secret to being popular: A case study of South Africa’s favourite bird

So why does everyone need to be popular to some degree? Rather simply: because if you are popular you have access to a larger social circle; and you can draw on their knowledge (if you’re in trouble) and resources (if you need money); and have your pick of partners (the tall, good-looking blonde for example). On the other hand being unpopular means one can be marginalized to the point of invisibility and since humans are social creatures, this carries a threat of being deprived of social and material resources critical to health and happiness, and perhaps to survival itself. Therefore we all have an innate need to be recognised, although the extent of this need will vary from the attention of one’s family to the attention of stadium crowds.

When I heard that South Africa’s favourite bird was the Cape Robin-chat my reaction was: What?! WHY? 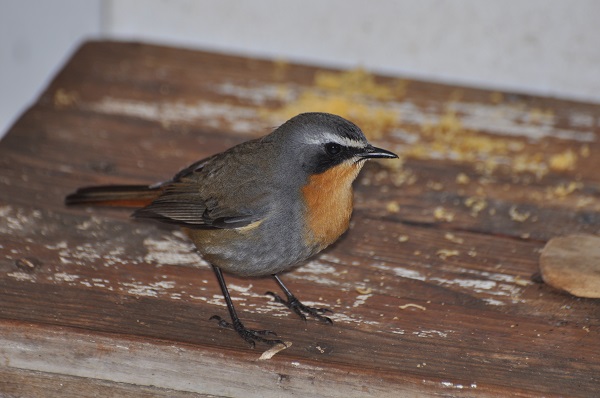 Some background information on the Cape Robin-chat: it is a medium sized song-bird, one of around 10 species of Robin in South Africa. It is widespread, and rather common, especially in suburban gardens. While it is a pretty bird, arguably there are more striking robin species: Chorister Robin-chat and Red-capped Robin-chat spring to mind. But it was competing with birds like this: 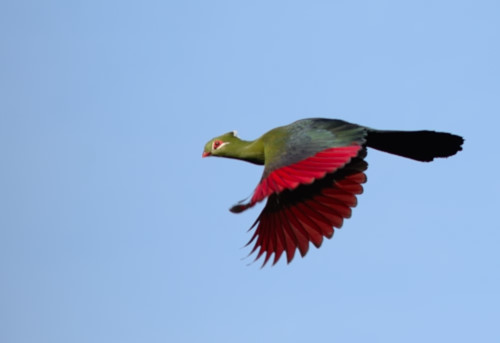 So, some important background information as to why Cape Robin-chat has the status of South Africa’s favourite bird. There are 846 species of birds in South Africa. These birds range in size from the world’s largest (Ostrich) to among the world’s smallest (Cape Penduline Tit); in colour from the almost indistinguishable cisticolas, larks and pipits to beautiful rollers, sunbirds and bee-eaters.
BirdLife South Africa, South Africas largest bird conservation NGO, decided to hold a poll to determine which South Africa’s favourite bird was. Given the expected coverage of the poll, the experts at BirdLife South Africa whittled down South Africa’s birdlist of 846 species to just 52, with representative species from most groups. Very boring groups were under represented (larks etc).

To make things interesting, a number of celebrities, sportspeople and organisations were invited to campaign for their favourite bird species. But this isn’t fair because then our targets are not judged on their inherent traits! Well, life isn’t fair, and this aspect makes this analysis all the more fascinating.

BirdLife South Africa then invited all South Africans to vote for their favourite bird in an online poll from December 2014 to February 2015 here: http://www.birdlife.org.za/vote; where summary results of the 9744 votes can now be seen. Given all the above, the status of the Cape Robin-chat should really be described as “South Africa’s favourite bird out of a set of 52 (or 6%) of South Africa’s bird species as voted by members of BirdLife South Africa and those exposed to the poll through their species’ champion campaigns”. A bit unwieldy, but nevertheless, we’ll settle for the simple title for the moment.

So what has this all got to do with being popular? Well: from an analytical perspective we now have a database of 52 species ranked by votes. I.e. we have a metric for rankism (popularity). We can now ask: what are the important factors in determining how well a species did in the poll?

Factors I consider are:

Size (some say it matters!)

Beauty (I subjectively ranked colour from 1 to 5 with 1 being dull, brown and boring; and 5 representing ooh-ahh colours)

Sociability (social creatures like meerkats receive more attention than lone mongoose species, and so I use flock size as a surrogate for this)

Marketing (27 species had a species champion)

Exposure (how often do the general public see the species? Here I used average reporting rates from the South African Bird Atlas Project or SABAP2)

Coverage (what proportion of the general public see the species? Here I used the species range size in South Africa again from atlas data: a count of sites (pentads) in which the species has been recorded)

Plaasjapie (perhaps those with a preference for the rural life are on a back foot when it comes to social niceties: in South Africa someone from a farm background is called a plaasjapie).


First off, the top ranked species all had species champions: someone marketing their cause, as you can see from this chart of the average number of votes across the two groups: 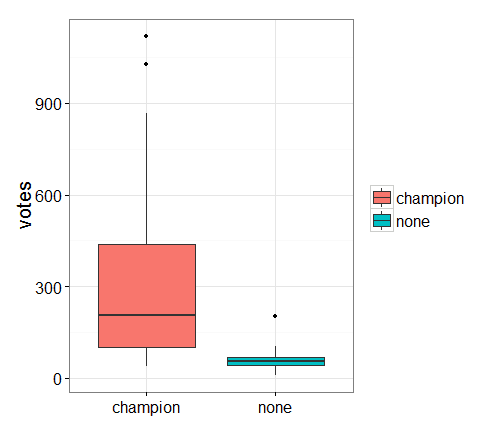 So having a champion may mask broader patterns for popularity and so I decided to look at each set of the remaining variables dividing the information into those with and those without a champion. A common predictor among each set is more likely to be useful to us overall and, as we will see, what contributes to being popular works very differently with and without a champion.

However, when doing such an analysis, it is a good idea not to include correlated variables. Apparently the plaasjapie birds are significantly bigger, with lower exposure and coverage. Isn’t that what we’d expect from a farmboy? These guys were pretty popular… and Cape Robin-chat was an exception for garden birds. 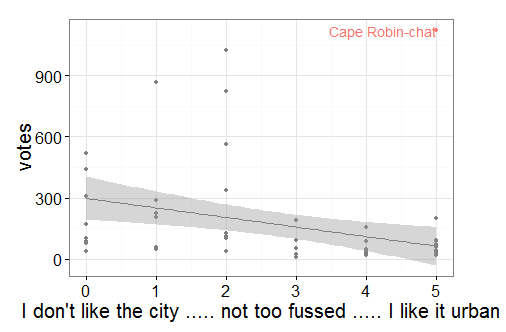 Good news is that size is not that important. Well, it is but it’s complicated. Perhaps size is important if we could account for boys vs girls where trends would be expected to work in different directions, but we can’t do that with this data.

As expected, looks are important, both if you have a champion and if you don’t. The good news is you can get away with being okay looking: our top ranked bird had a beauty score of 3 out of 5. But looks don’t count for everything: the group of most beautiful birds as a group did not score higher than the ones and twos. Perhaps personality accounts for something: who’d you rather date: a beautiful wax model from Madame Tussaudes or a real person? 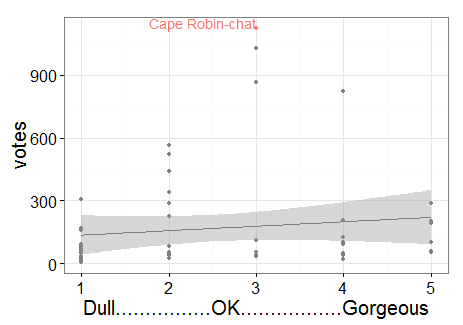 Turns out though when it comes to birds, being social and preferring to be in bigger groups does not work in your favour if you have a champion! Perhaps that’s the secret to being a successful politician? Again: Cape Robin-chat is pretty much a loner – but is also an exception in that group, as most other loners had very few votes, especially if they didn’t have a champion. 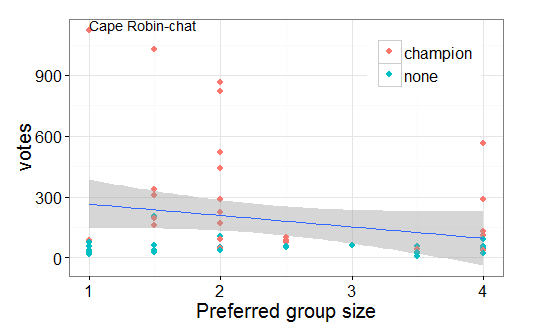 So lets round this off by looking at the two more marketing related variables: coverage and exposure. I took how common a species was and treated this as exposure: how often someone was likely to see a bird on a day to day basis. It turns out that this is an important variable that works in very different ways depending on if you have a champion or not, and probably means two very different things. Firstly, it is clear that if you don’t have a champion, then increased coverage is a good thing. However, those species with champions had higher scores if they were rare! Perhaps this can also be interpreted that a rare bird is special; or that special makes you more popular. Coverage (range) showed a similar trend to exposure. 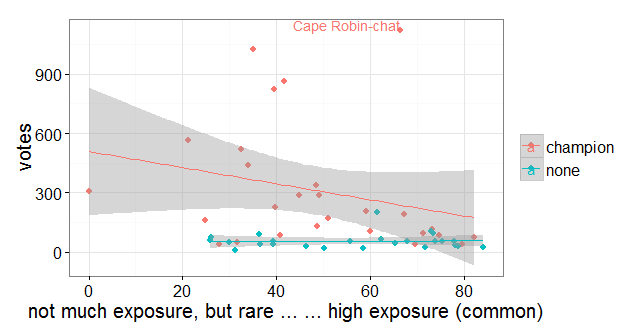 What does this all mean for being popular, or a bird? From both perspectives it is very clear that having a champion is very important for your popularity. Having a champion means you can overcome perceived shortcomings and even turn some of these to your advantage with the right marketing campaign! For the bird this means you are more likely to be the focus of conservation initiatives and it will be easier to raise money to help you. It is no secret to big companies that marketing is important, which is the reason it is a multi-billion dollar industry, and why we are subjected to some very bizarre things through the media. On the other hand if you’re a teenager looking for a boyfriend, social media and broadcasting oneself is going to be important – a fact innately grasped by so many already today.

Clearly this analysis does not cover all aspects of trends in popularity for birds or people: the quality of your voice, confidence (very important!), various symmetrical variables, socio-economic backgrounds etc. We’re dealing with a cherry picked sample and I could not rate the quality of marketing campaigns or efforts. However, it does help me to understand why the Cape Robin-chat is South Africa’s favourite bird. 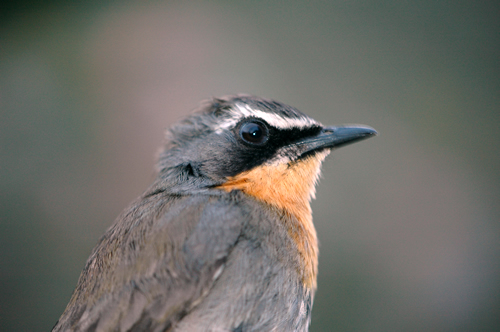 Technical details
I used a glm to model votes as a function of the various variables, with a poisson distribution. I used the step function to select the best model. Only significant variables with p<0.01 in the final models are illustrated above.