“There’s an owl on the ground!” I pointed excitedly just off the road in front of us to my sister and her boyfriend. We’d just started a drive to the high part of the reserve when I noticed the bundle of feathers unusually exposed and obvious for relatively late in the morning.

We admired it for a while, and it seemed to ignore us, so I continued towards it slowly and carefully. Eventually it sat up and glared at us, and as I inched closer it hopped slowly away. Something wasn’t right. Any other owl I’d seen around here was usually flushed up and flying away at a fair distance by now.

I got out the Toyota land-cruiser and started to approach, and the owl continued to hop lethargically away. Several things were going through my mind: was the owl suffering from eating a poisoned rat? Even if I do catch it, what will I do with it? I don’t have the time or resources to dedicate to looking after an injured bird, and I was a bit sceptical about what would happen given my last rescue attempt with the meerkat.

I scooped the owl up easily after it gave up its chase among some dead bushes. It clacked its beak in warning, but I was more worried about the massive talons. Now that I had the bird in hand it was clear what was wrong: the bird had a severely damaged eye, and was clearly thin and malnourished. It was likely starving to death due to an inability to feed itself.

What now? John, my sister’s boyfriend had mentioned that his daughter was in Knysna. Radical Raptors, the only people who I could think of who would be able to examine and perhaps rehabilitate the bird were down the road in Plettenberg Bay.

John agreed to drive, and 3 hours later over the busy and bumpy Prince Alfred’s pass we delivered the owl to Dennis at Radical Raptors. Another 4 hour drive later we were back home at Blue Hill. A long way to save a bird, but in this world were almost everything we do has a negative impact on the environment, I had felt compelled to make the effort for this beautiful bird.

The following day we received the good news that the owl was eating and had regained energy. Whether it will be worthwhile releasing the bird again remains to be seen. 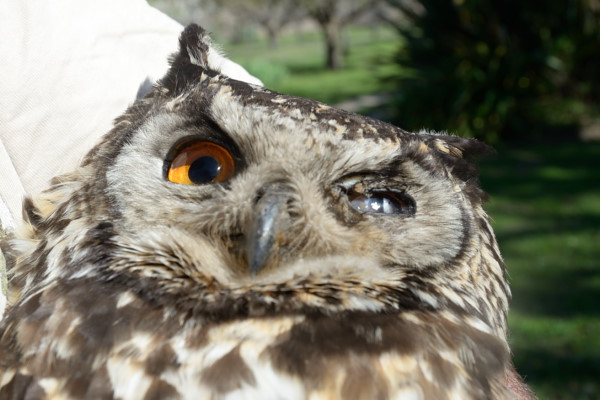