Why is a Cape Sugarbird like a Cape Mountain Leopard?

So what do Cape Sugarbirds and Cape Leopards have in common? Both are able to survive in the sometimes very inhospitable Cape Fold Mountains, which often experience freezing temperatures and very high winds. They inhabit the Fynbos biome, which despite being nutrient poor, supports a vast array of unique plant species. This biome is under threat from land use change, alien plant invasion and climatic changes which are resulting in warmer temperatures and increased fire danger indices.
The Fynbos is important not just for South Africa’s biodiversity, but for that of the world – covering just 2% of the planet it is one of five Mediterranean climate ecosystems which account for 20% of all plant biodiversity. Apart from being home to 7000 plants species found nowhere else in the world, it is also home to six endemic species of bird (a third of South Africa’s endemic bird species). Cape Sugarbirds and Orange-breasted Sunbirds are some of the most emblematic of these. Cape Sugarbirds are important pollinators of many kind of protea, and rely on these plants for food and nesting sites. Cape Sugarbirds are abundant in areas with a diverse array of proteas, but are all but absent from areas converted to agriculture or which are too frequently burnt – they are vulnerable to increasing fire frequencies. 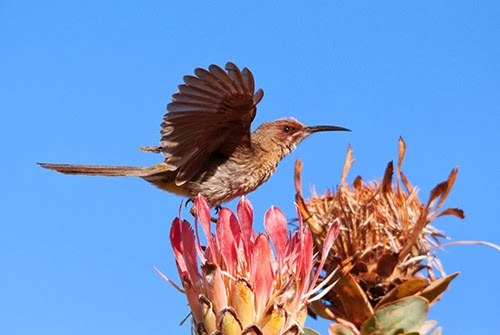 In addition, both Cape Sugarbirds and Cape Leopards are being monitored using camera traps. While Cape Sugarbirds do not have the unique spots that the leopards have, they can be given unique identifying features in the form of coloured ring combinations placed on their legs. This is being undertaken by the Fynbos Endemic Birds survey at study sites around Cape Town and towards Baviaanskloof. The Cape Leopard Trust were very kind to loan us some remote sensing cameras to aid us in our quest to find out more about these important birds of the Fynbos. Using the cameras we are busy monitoring visitation rates to proteas, and hoping to detect clues as to bird movements by obtaining resightings in different locations. We are trying to determine how far the birds are moving on a regular basis. Like Cape Leopards, Cape Sugarbirds defend breeding territories – but they have to leave these if the territory does not host a range of food plants that flower all year round.

Understanding movements is one of the key reasons why we ring birds. It is important to know how far and when birds move, as we can then make habitat management plans in order to ensure the survival of a species – as indeed we must as they are very much part of our South African biodiversity heritage. By understanding the bird movements we will better be able to understand if they will be capable of overcoming the threats to the biodiversity of the region. For example, can they cross a large area of modified landscapes, or areas that have experienced frequent fires that may be threatening local protea populations? What happens if it gets drier and hotter for longer periods?

These are some of the questions that the Fynbos Endemic Bird Survey is attempting to answer. The project is supported by South Africa’s leading bird conservation organisation – Birdlife South Africa, the South African National Biodiversity Institute (SANBI) and the Percy FitzPatrick Institute of African Ornithology (University of Cape Town).

This article was originally published in Environment - People and Conservation in Africa Issue 17, Summer 2013, for the Cape Leopard Trust, entitled Cape Sugarbirds and Leopards - the semantics