In my previous post I documented a placid Cape Rockjumper release, in this one I document a rare fight sequence. This has been the only one we have observed to date. Mostly the birds are happy to call and display to each - I've never seen a full on fight before.

I had just released a male Cape Rockjumper back where we had caught him and he flew quickly out of sight. However, I heard him calling and decided to get a closer look. His calling was answered promptly by another male close to hand. The interloper was an unringed bird, and must have used the period of the resident males absence to attempt a territory take over. The recently released male was not going to put up with that and quickly flew over to the usurper. A lot of calling, displaying and posturing took place, and then a brief midair full on contact fight occurred.

A period of about 10 minutes of chasing and calling ensued, which took the birds over the valley and out of sight. Birds that we catch are fed up on meal worms and always gain weight - so I'm hoping this was to the residents advantage and things are now back to normal.

Photo quality is poor as these are cropped photos: the action took place a bit far away for nice crisp shots. 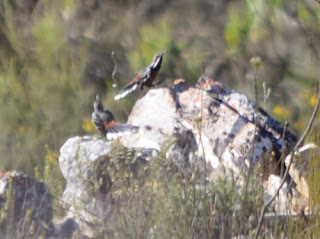 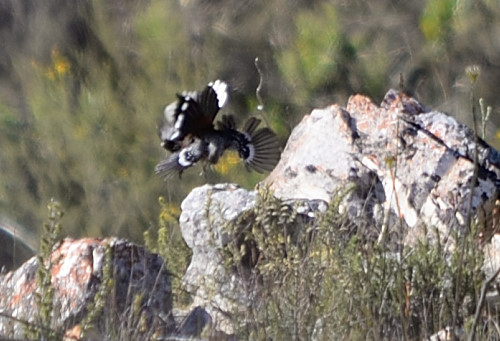