A death by a thousand cuts – this was the title of a talk given by South African botanist extraordinaire Jan Vlok at a meeting of the Gouritz Cluster Biosphere Reserve meeting some weeks ago. While the protected areas of the Western Cape may look good on paper, the reality in the field is that agricultural land transformation, game fencing, alien vegetation and the many other smaller impacts of human activity on the heartlands of the Cape Floristic Region means that to Jan the regions faces a death by a thousand cuts. To clarify – a death by a thousand cuts definition from Wikipedia.... “Lingchi - the slow process, the lingering death, or slow slicing, was a form of torture and execution used in China from roughly AD 900 until it was banned in 1905. In this form of execution, a knife was used to methodically remove portions of the body over an extended period of time, eventually resulting in death.”

In short, we cannot be complacent about the threats to this very special part of the world. Apart from agricultural land transformation, where land goes under the plow to devastate biodiversity for the sake of monocultural fodder crops on a scale comparable to nuclear holocast, the most insidious threat for whom no-one is accountable is the threat of alien vegetation. In short,

That was my conclusion a few weeks ago as I pulled out >250 young Hakea plants that all originated from 1 single Hakea bush on the southern slopes of our Kouga mountains. The young Hakea were 3 years old, but already maybe a meter tall on average. The indigenous Protea eximia on the same slope were maybe 30cm. Worse, at least 4 Hakea plants already had seed cones from the previous season, and all were in flower. None of the indigenous protea were close to reproducing. Perhaps one Hakea had died, and maybe 5% had signs of gumosis, the introduced bioagent to control Hakea. Clearly this species is still out competing native vegetation at an alarming rate.

From the relatively clean Kouga mountains, where we have worked hard for years to remove wattle, pine and hakea, I often gaze to the Tsitsikamma ranges to the south, where pine trees dot the ridges and wattle chokes the streams. The war against wattle and alien vegetation will not be won in my lifetime – but more to the contrary my fear is that it is one that will be lost.

But still we struggle on. In May, together with my neighbour I applied for seed weevil biocontrol agents for the Silver wattle (Acacia dealbata) that infests the streams in our conservancy. Yesterday I obtained these and released these in the stands of wattle that we can no longer afford to clear ourselves. The landowners here have cleared substantial areas already, but follow up is an eternal task – the seed banks are massive. We cleared the adult trees in 2011 and this year 4 years later where we conducted a small burn the seedlings came up like a grassy lawn. With a seedbank that could last 50 years, I will likely be pulling out wattle from our stream beds until the day I die.

Hopefully with the help of the weevils, the task will be easier for future generations.

Thanks to Reley Bell and Herson Amill from Department of Environmental Affairs for supplying the weevils. 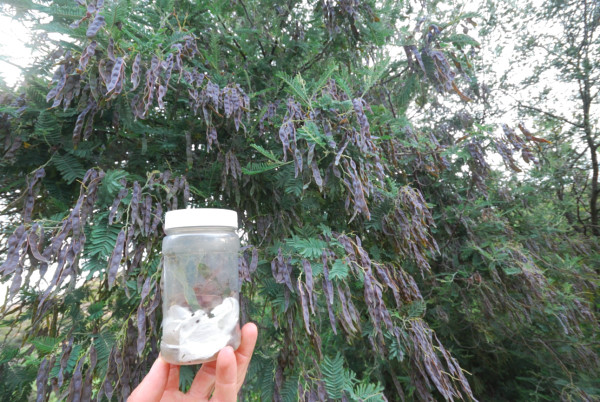 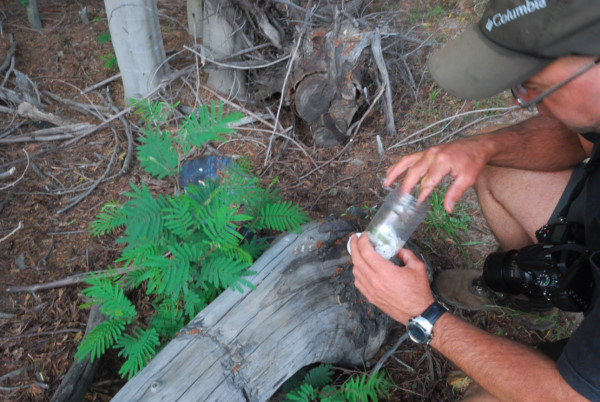